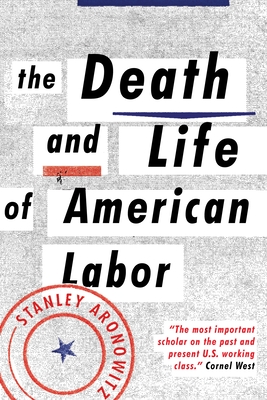 The Death and Life of American Labor

Toward a New Workers' Movement

The decline of the American union movement—and how it can revive, by a leading analyst of labor

Union membership in the United States has fallen below 11 percent, the lowest rate since before the New Deal. Labor activist and scholar of the American labor movement Stanley Aronowitz argues that the movement as we have known it for the last 100 years is effectively dead. And he explains how this death has been a long time coming—the organizing and political principles adopted by US unions at mid-century have taken a terrible toll. In the 1950s, Aronowitz was a factory metalworker.

In the ’50s and ’60s, he directed organizing with the Amalgamated Clothing Workers and the Oil, Chemical and Atomic Workers. In 1963, he coordinated the labor participation for the March on Washington for Jobs and Freedom. Ten years later, the publication of his book False Promises: The Shaping of American Working Class Consciousness was a landmark in the study of the US working-class and workers’ movements.

Aronowitz draws on this long personal history, reflecting on his continuing involvement in labor organizing, with groups such as the Professional Staff Congress of the City University. He brings a historian’s understanding of American workers’ struggles in taking the long view of the labor movement. Then, in a survey of current initiatives, strikes, organizations, and allies, Aronowitz analyzes the possibilities of labor’s rebirth, and sets out a program for a new, broad, radical workers’ movement.


Praise For The Death and Life of American Labor: Toward a New Workers' Movement…

“Stanley Aronowitz is the most important scholar on the past and present US working class.”
—Cornel West, author (with Tavis Smiley) of The Rich and the Rest of Us

“Four decades after False Promises, his classic study of class consciousness, Stanley Aronowitz stirringly returns to questions of work, power, and inequality in this exciting study. Steeped in historical knowledge, theoretical insight, and movement experience, The Death and Life of American Labor sustains a remarkable combination of sober reflection and grounded hope for a new workers’ movement, one without unions always at its center. It shows how the exhaustion of liberalism and the perils of climate change, temporary work, and new technologies both necessitate and foster fresh approaches.”
—David Roediger, author of Seizing Freedom

“Nothing less than a brilliantly argued demand for the labor movement to shed its ill-conceived twentieth-century ‘partnership’ garb with Capital and the Democratic Party and reinvent itself in the twenty-first century … Where others see an inevitable demise, Aronowitz finds hope for a rebirth that includes collective bargaining but goes well beyond it.”
—Rose Ann DeMoro, Executive Director, National Nurses United

“For over a generation, Stanley Aronowitz has been one of the left’s most prolific, passionate and provocative academic-writer-activists. His special focus has been on the long-running crisis in the trade union movement. Writing for both an academic and lay readership, this latest work addresses concretely the question of union renewal and once again offers his trademark combination of trenchant historical overview, accessible analysis, and application of the radical imagination.”
—Sam Gindin, author (with Leo Panitch) of The Making of Global Capitalism

“Aronowitz calls for a revival of a radical vision … Should be read by all those who worry about labor’s future.”
—Labor: Studies in Working-Class History of the Americas

Stanley Aronowitz has taught at the Graduate Center of the City University of New York since 1983, where he is Distinguished Professor of Sociology and Urban Education, and where he is Director of the Center for the Study of Culture, Technology and Work. He is author or editor of twenty-five books and is founding editor of the journal Social Text.
Loading...
or
Not Currently Available for Direct Purchase