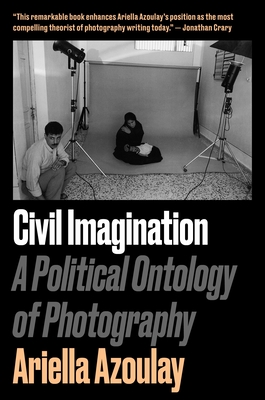 A Political Ontology of Photography

Understanding photography is more than a matter of assessing photographs, writes Ariella Azoulay. The photograph is merely one event in a sequence that constitutes photography and which always involves an actual or potential spectator in the relationship between the photographer and the individual portrayed. The shift in focus from product to practice, outlined in Civil Imagination, brings to light the way images can both reinforce and resist the oppressive reality foisted upon the people depicted.

Through photography, Civil Imagination seeks out relations of partnership, solidarity, and sharing that come into being at the expense of sovereign powers that threaten to destroy them. Azoulay argues that the &ldquo;civil&rdquo; must be distinguished from the &ldquo;political&rdquo; as the interest that citizens have in themselves, in others, in their shared forms of coexistence, as well as in the world they create and transform. Azoulay&rsquo;s book sketches out a new horizon of civil living for citizens as well as subjects denied citizenship—inevitable partners in a reality they are invited to imagine anew and to reconstruct.

Beautifully produced with many illustrations, Civil Imagination is a provocative argument for photography as a civic practice capable of reclaiming civil power.

Praise For Civil Imagination: A Political Ontology of Photography…

“This remarkable book enhances Ariella Azoulay’s position as the most compelling theorist of photography writing today. Photography, she argues, must be understood as a collective event in which vision, speech and action are intertwined and inseparable from ongoing global struggles between sovereign violence and civil society.”
—Jonathan Crary, Meyer Schapiro Professor of Modern Art and Theory, Columbia University

“This book is a major intervention in the field of political philosophy, visual cultures, photography and architecture. The new ontology of photography developed by Azoulay builds upon, but also decisively challenges, articulated relations between the aesthetic and the political from Kant through Benjamin, Arendt and Rancière. Here, Azoulay uses her theory to suggest an alternative politics based on the re-reading and reinterpretation of photographs of the Nakba in 1948 and of the architecture of the Israeli occupation since 1967. Civil Imagination is nothing less than a proposal for a new form of politics now made ever more relevant throughout the Middle East.”
—Eyal Weizman, author of Hollow Land and Least of All Possible Evils

“Takes on the state of our contemporary visual culture and takes aim at the many received ideas that march under the banner of ‘art and politics.’”
—The Brooklyn Rail

“Both an extremely demanding text that attempts a new articulation of the category of the ‘civil’ and a sophisticated photographic essay … The result here is a powerful index of catastrophe and a meditation on the effects on both Israeli and Palestinian of an insidious and coercive colonial ideology.”
—John Douglas Millar, Art Monthly

“Civil Imagination acts as a necessary yet cruel reminder that an uncritical relationship with the social idea of photography could easily determine whose life is not worthy of living.”
—Gil Pasternak

Ariela Azoulay teaches political thought and visual culture at Brown University.
Loading...
or support indie stores by buying on
(This book is on backorder)