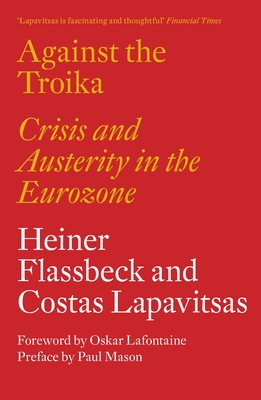 Against the Troika (Paperback)

Crisis and Austerity in the Eurozone

On the 25th January 2015 the Greek people voted in an election of historic importance—not just for Greece but potentially all of Europe. The radical party Syriza was elected and austerity and the neoliberal agenda is being challenged. Suddenly it seems as if there is an alternative. But what?

The Eurozone is in a deep and prolonged crisis. It is now clear that monetary union is a historic failure, beyond repair—and certainly not in the interests of Europe’s working people.

Building on the economic analysis of two of Europe’s leading thinkers, Heiner Flassbeck and Costas Lapavitsas (a candidate standing for election on Syriza’s list), Against the Troika is the first book to propose a strategic left-wing plan for how peripheral countries could exit the euro. With a change in government in Greece, and looming political transformations in countries such as Spain, this major intervention lays out a radical, anti-capitalist programme at a critical juncture for Europe. The final three chapters offer a detailed postmortem of the Greek catastrophe, explain what can be learned from it—and provide a possible alternative.

Against the Troika is a practical blueprint for real change in a continent wracked by crisis and austerity.

Heiner Flassbeck was chief macroeconomist in the German Institute for Economic Research (DIW) in Berlin between 1988 and 1998, and State Secretary (Vice Minister) from October 1998 to April 1999 at the Federal Ministry of Finance, Bonn, responsible for international affairs, the EU and IMF. He worked at UNCTAD since 2000; from 2003 to December 2012 he was Director of the Division on Globalisation and Development Strategies. He was the principal author of the team preparing UNCTAD's Trade and Development Report. Since January 2013 he is Director of Flassbeck-Economics, a consultancy for global macroeconomic questions.

Costas Lapavitsas is a candidate standing for election on Syriza’s list. He is a Professor of Economics at the School of Oriental and African Studies, University of London. He is a member of Research on Money and Finance (RMF). He was the lead author of the RMF reports published by Verso as Crisis in the Eurozone. His previous publications include Social Foundations of Markets, Money and Credit, Political Economy of Money and Finance and Profiting Without Producing: How Finance Exploits Us All.

Praise For Against the Troika: Crisis and Austerity in the Eurozone…

“Highly readable … A fresh and imaginative look at the crisis, it contributes greatly to the relevant debate, and is especially useful in detailing the theoretical foundations of economic programmes advocated by the radical Left parties that have begun to gain strength across Europe, and in particular Syriza.”
—Times Higher Education

“This little book takes up the question of what a left government can do in the face of powerful elites who have savaged the country’s infrastructure in the failed pursuit of budget surpluses. Crucially it charts a path for those who want a clearer view of the way out of the euro.”
—Socialist Review

“Demonstrate[s] with clarity that the mercantilist and deflationary policies pursued by Germany since the beginning of EMU must carry the blame for the great rupture that is currently threatening Europe.”
—Oskar Lafontaine, former president of the Social Democratic Party and the Die Linke Party in Germany

“For those who … still believe Europe can be reformed to deliver social justice, growth and high-welfare societies, the authors do the valuable service of spelling out what that would take: the defeat not only of the mainstream conservative parties but also of their right-wing, nationalist challengers, and the total transformation of European social democracy in the direction of heterodox, fiscally expansionist economic policy, and the triumph of the as yet untested new left parties.”
—Paul Mason (from the Preface)
or
Not Currently Available for Direct Purchase
Copyright © 2020 American Booksellers Association