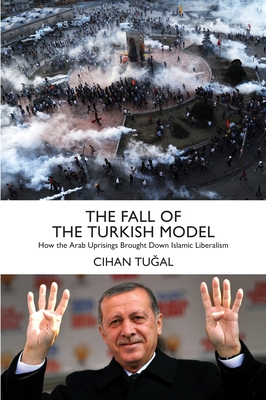 The Fall of the Turkish Model (Paperback)

How the Arab Uprisings Brought Down Islamic Liberalism

The brief rise and precipitous fall of “Islamic liberalism”

Just a few short years ago, the “Turkish Model” was being hailed across the world. The New York Times gushed that prime minister Recep Tayyip Erdogan and his Justice and Development Party (AKP) had “effectively integrated Islam, democracy, and vibrant economics,” making Turkey, according to the International Crisis Group, “the envy of the Arab world.” And yet, a more recent CNN headline wondered if Erdogan had become a "dictator.”

In this incisive analysis, Cihan Tugal argues that the problem with this model of Islamic liberalism is much broader and deeper than Erdogan’s increasing authoritarianism. The problems are inherent in the very model of Islamic liberalism that formed the basis of the AKP's ascendancy and rule since 2002—an intended marriage of neoliberalism and democracy. And this model can also only be understood as a response to regional politics—especially as a response to the “Iranian Model”—a marriage of corporatism and Islamic revolution.

The Turkish model was a failure in its home country, and the dynamics of the Arab world made it a tough commodity to export. Tugal’s masterful explication of the demise of Islamic liberalism brings in Egypt and Tunisia, once seen as the most likely followers of the Turkish model, and provides a path-breaking examination of their regimes and Islamist movements, as well as paradigm-shifting accounts of Turkey and Iran.

Cihan Tugal is the author of Passive Revolution: Absorbing the Islamic Challenge to Capitalism. He is an associate professor of sociology at the University of California, Berkeley.

Praise For The Fall of the Turkish Model: How the Arab Uprisings Brought Down Islamic Liberalism…

“In this ambitious book, Tugal compares Turkey’s approach to those of Egypt, Iran, and Tunisia by examining how neoliberal economic strategies have played out in each place, paying particular attention to how governments have tried to engage devout Muslim constituencies in the neoliberal project.”
—Foreign Affairs

“A well written and well researched book offering an alternative reading of Turkey’s claim to Islamic liberalism as a model for other Islamic countries to emulate.”
—Gorkem Altinors, Progress in Political Economy

“The idea of the ‘Turkish model’ has roots going back to the start of the Cold War. Plenty of postmortems have been written for it; no doubt they will continue to be written … Tuğal takes a longer structural view, arguing that ‘the successful liberalization in Turkey during the last three decades itself paved the way for Islam’s later authoritarian and conservative incarnations.’ Tackling the question from the left, he writes that the cause of Turkey’s crisis was ‘the neoliberal-liberal democratic model (rather than Erdoğan the villain—or, for that matter, “Turkish culture”).’”
—Hurriyet
or
Not Currently Available for Direct Purchase
Copyright © 2020 American Booksellers Association