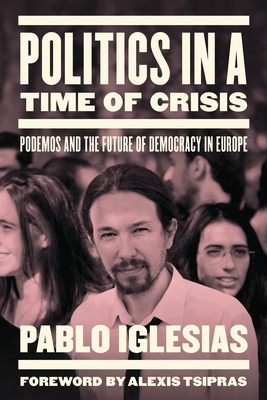 Politics in a Time of Crisis

Podemos and the Future of Democracy in Europe

A manifesto for a new, democratic left: a political programme poised to transform Europe

Since 2011, Pablo Iglesias has led Podemos, a new radical left party in Spain that is reframing the nature of modern politics. Under his guidance, the party has unmasked the ideological motives behind European austerity, revealing the true nature of this power grab conducted on behalf of elites intent on dismantling the welfare state. Here, Iglesias delineates his political vision. He skewers not only the Spanish establishment, but also the anti-democratic bloc comprising the Troika, corporate interests, and the “Wall Street Party.”

Politics in a Time of Crisis—which includes an in-depth interview with Iglesias—is an incisive examination of the current situation in Europe as well as a stirring call for international resistance.

Praise For Politics in a Time of Crisis: Podemos and the Future of Democracy in Europe…

“What shines through is Iglesias’s determination to rid the left of its ambivalence towards political power. He ridicules the ‘white knights of the purity of principle,’ too obsessed with theory to actually fight for change.”
—Financial Times

“Iglesias mixes the serious with the playful, political theory with pop culture. He cites Billy Elliot and The Wire alongside Francis Fukuyama and David Harvey to discuss neoliberalism’s corrosion of the postwar social democratic consensus, Game of Thrones alongside Gramsci to illustrate the meaning of power. The book is aimed at the ‘youth without a future,’ the generation for whom adult life will begin with the considerable difficulty of getting away from the family home.”
—Dan Hancox, London Review of Books

“There are few precedents for such an explosive political ascent in modern western Europe … Podemos has thrived because it has shredded the old left rulebook.”
—Owen Jones

“What’s clear from Iglesias’ passionate arguments is that there is another, deeper agenda afoot. Podemos is trying to restore public faith in democracy: in the notion that a party can win power and administer the state without falling under the lure of greed and corruption, and without violating their promises to the electorate or selling out quality public services.”
—Hans Rollman, Pop Matters

“If there is a single book that embodies the activist left’s turn towards electoral politics it is Pablo Iglesias’s Politics in a Time of Crisis.”
—Paul Mason, Guardian

Pablo Iglesias was a university lecturer in Madrid and a TV presenter of the leading Spanish political news show until 2014. In that year he formed Podemos and won a seat in the European Parliament elections. The party gained 100,000 members in its first eight weeks.
Loading...
or
Not Currently Available for Direct Purchase