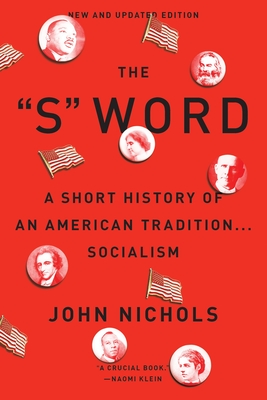 A Short History of an American Tradition...Socialism

During the Cold War it became a dirty word in the United States, but “socialism” runs like a red thread through the nation’s history, an integral part of its political consciousness since the founding of the republic. In this unapologetic corrective to today’s collective amnesia, John Nichols calls for the proud return of socialism in American life. He recalls the reforms lauded by Founding Father Tom Paine; the presence of Karl Marx’s journalism in American letters; the left leanings of founders of the Republican Party; the socialist politics of Helen Keller; the progressive legacy of figures like Chaplin and Einstein. Now in an updated edition, The “S” Word makes a case for socialist ideas as an indispensable part of American heritage. A new final chapter considers the recent signs of a leftward sea change in American politics in the face of increasing and historic levels of inequality.

Today, corporations—like other rich “individuals”—pay fewer taxes than they did in the 1950s, while our infrastructure crumbles and the seas rise. The “S” Word addresses a nation that can no longer afford to put capital before people.

Praise For The S Word: A Short History of an American Tradition...Socialism…

“A chilling reminder of how much rich American history has been erased by shallow messaging. A crucial book.”
—Naomi Klein

“Of all the giant slayers now afoot in the great American desert, John Nichols’s sword is the sharpest, his footwork the most graceful, his brain the most cunning.”
—Gore Vidal

“[A] search for the legacy of our homegrown radicals.”
—Washington Post

John Nichols is the Washington correspondent for The Nation magazine, a contributing writer for the Progressive and In These Times, and the associate editor of Madison, Wisconsin’s Capital Times. He is the author of several books, including The Death and Life of American Journalism and The Genius of Impeachment.
Loading...
or support indie stores by buying on