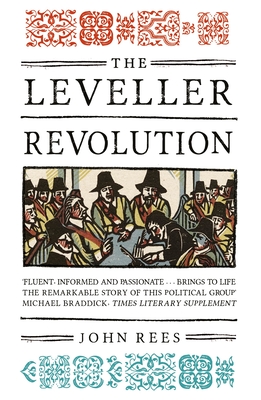 The gripping story of the Levellers, the radical movement at the heart of the English Revolution

The Levellers, formed out of the explosive tumult of the 1640s and the battlefields of the Civil War, are central figures in the history of democracy. In this thrilling narrative, John Rees brings to life the men—including John Lilburne, Richard Overton and Thomas Rainsborough—and women who ensured victory and became an inspiration to republicans of many nations.

From the raucous streets of London and the clattering printers’ workshops that stoked the uprising, to the rank and file of the New Model Army and the furious Putney debates where the Levellers argued with Oliver Cromwell for the future of English democracy, this story reasserts the revolutionary nature of the 1642–51 wars and the role of ordinary people in this pivotal moment in history.

In particular Rees places the Levellers at the centre of the debates of 1647 when the nation was gripped by the question of what to do with the defeated Charles I. Without the Levellers and Agitators’ fortitude and well-organised opposition history may have avoided the regicide and missed its revolutionary moment. The legacy of the Levellers can be seen in the modern struggles for freedom and democracy across the world.

John Rees is an historian, broadcaster and campaigner. He is coauthor of A People’s History of London and author of Timelines: A Political History of the Modern World, among other titles. He is a Visiting Research Fellow at Goldsmith’s, University of London and a National Officer of the Stop the War Coalition.

Praise For The Leveller Revolution: Radical Political Organisation in England, 1640-1650…

“A profound and scholarly account of the Levellers—the nonconformist republican radicals who clashed first with the monarch and then with Oliver Cromwell himself. The book combines the military-political history of the English revolution with an account of the social and ideological struggles that produced, out of the backstreets of 17th-century London, one of modernity’s first revolutionary social movements.”
—Paul Mason, Guardian (“Best Books of 2016”)

“Rees likes his subjects, as should anyone who values democracy and social justice. This is not just a readable narrative, explaining the development of the Levellers, but an inspirational romance for the political left, and a timely one. It’s a remarkable story because its actors are remarkable.”
—Malcolm Gaskill, Financial Times

“A fast-paced and tightly focused narrative which puts the Levellers centre stage in the English Revolution; essential reading for all those interested in history and radical politics.”
—Ariel Hessayon, Goldsmiths University of London

“In his impressive new book John Rees sets out to return the Levellers to centre stage … [his] research is splendid, his understanding of the period is admirable … thoroughly entertaining, and thought-provoking.”
—Glasgow Herald

“The Leveller Revolution is of real importance. John Rees’ highly readable account … puts the Levellers at the centre of the revolution, where they deserve to be.”
—Dominic Alexander, Counterfire

“A significant contribution to understanding how important radical ideas were to the creation of modern parliamentary rule.”
—Labour Research

“A scrupulously researched, carefully told narrative, and a work of impressive scholarship.”
—David Horspool, The Spectator

“This book is not a work of political analysis alone. It is also a flesh-and-blood story, with personalities, episodes, dramas, confrontations, heroism and betrayals. In telling it so well, Rees retrieves the struggle of the Levellers from relative shade to the benefit of the revolutionary tradition as a whole.”
—Morning Star

“Rees has written a substantial book that offers a detailed narrative history of the Levellers and their role in the events of the 1640s and 1650s … His archival work is thorough and the results are vivid.”
—Paul Lay, Literary Review

“An absorbing and fluent narrative of the political life of the foremost radical group to emerge during the English Revolution. The book is much needed.”
—Ted Vallance, History Today

“Scholarly, engagingly written, and passionately committed … this is a fine and stimulating study that makes a major contribution to our understanding of the Leveller movement and of the period.”
—Bernard Capp, Renaissance Quarterly

“Combines an engaging narrative account of the Leveller movement with a distinctive line of argument and constitutes a serious contribution to scholarly work on the Levellers and the English Revolution.”
—Rachel Hammersley, Milton Quarterly
or
Not Currently Available for Direct Purchase
Copyright © 2020 American Booksellers Association