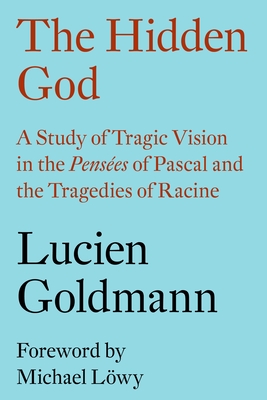 A new edition of a major philosophical work

This remarkable text, first published in 1964, was a landmark of its era and remains, in the words of Michael Löwy, a work of “remarkable richness.” Drawing on Georg Lukács’ History and Class Consciousness, Lucien Goldmann applies the concept of “world visions” to flesh out the similarities between Pascal’s Pensées and Kant’s critical philosophy, contrasting them with the rationalism of Descartes and the empiricism of Hume.

For Goldmann, a leading exponent of the most fruitful method of applying Marxist ideas to literary and philosophical problems, the “tragic vision” marked an important phase in the development of European thought, as it moved from rationalism and empiricism to the dialectical philosophy of Hegel, Marx and Lukàcs. Here he offers a general approach to the problems of philosophy, of literary criticism, and of the relationship between thought and action in human society.

Lucien Goldmann was a French philosopher and sociologist of Jewish-Romanian origin. As a professor at the School for Advanced Studies in the Social Sciences in Paris, he was an influential Marxist theorist.

Michael Löwy is Research Director of Sociology at the Centre National de la Recherche Scientifique, Paris. His previous books include Redemption and Utopia: Liberation Judaism in Central Europe, Marxism in Latin America and The War of the Gods: Religion and Politics in Latin America.

Praise For The Hidden God: A Study of Tragic Vision in the Pensées of Pascal and the Tragedies of Racine…

“The Hidden God was one of the major works of social science of Marxist inspiration of the 1950s; and it remains today a text of remarkable richness, opening up an impressive number of paths for reflection.”
—Michael Löwy

“It seems to me extraordinary, looking back, that I did not then [while writing The Long Revolution] know the work of Lukács or of Goldmann, which would have been highly relevant to it, and especially as they were working within a more conscious tradition and in less radical an isolation … it is easy to imagine my feelings when I discovered an active and developed Marxist theory, in the work of Lukács and Goldmann, which was exploring many of the same areas with many of the same concepts, but also with others in a quite different range.”
—Raymond Williams, New Left Review

“One of the most important thinkers of the Marxist method in sociology, philosophy and literary criticism.”
—Ian Birchall, International Socialism
or
Not Currently Available for Direct Purchase
Copyright © 2020 American Booksellers Association