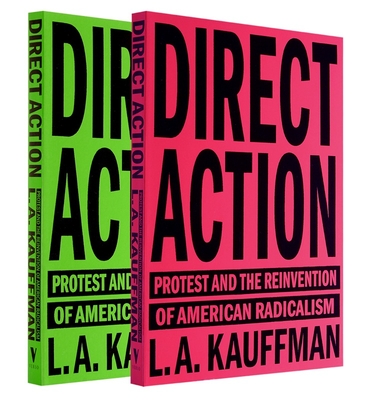 Protest and the Reinvention of American Radicalism

As Americans take to the streets in record numbers to resist the presidency of Donald Trump, L.A. Kauffman’s timely, trenchant history of protest offers unique insights into how past movements have won victories in times of crisis and backlash and how they can be most effective today.

This deeply researched account, twenty-five years in the making, traces the evolution of disruptive protest since the Sixties to tell a larger story about the reshaping of the American left. Kauffman, a longtime grassroots organizer, examines how movements from ACT UP to Occupy Wall Street to Black Lives Matter have used disruptive tactics to catalyze change despite long odds.

Kauffman's lively and elegant history is propelled by hundreds of candid interviews conducted over a span of decades. Direct Action showcases the voices of key players in an array of movements – environmentalist, anti-nuclear, anti-apartheid, feminist, LGBTQ, anti-globalization, racial-justice, anti-war, and more – across an era when American politics shifted to the right, and a constellation of decentralized issue- and identity-based movements supplanted the older ideal of a single, unified left.

Now, as protest movements again take on a central and urgent political role, Kauffman’s history offers both striking lessons for the current moment and an unparalleled overview of the landscape of recent activism. Written with nuance and humor, Direct Action is essential reading for anyone interested in understanding the protest movements of our time.

Product Alert: Book will have either a neon magenta cover or a neon green cover. Color is not selectable.

Praise For Direct Action: Protest and the Reinvention of American Radicalism…

L.A. Kauffman’s Direct Action is the best overview of how protest works—when it does—and what it’s achieved over the past 50 years.
—Rebecca Solnit, New York Times

“It is impossible to overstate the importance of this book. Chances are that even if you know something about the recent history of the left in America, you probably only know a few isolated parts. L.A. Kauffman has connected a vast field of dots to create an overview, and she has done so with dispatch, clarity, and elegance. Her book is essential reading for today, and will be for tomorrow.”
—Luc Sante, author of The Other Paris

“A movement tour de force. A must-read for those who have committed themselves to the life of the mind and of struggle.”
—Rev. Osagyefo Uhuru Sekou, theologian and organizer

“As the new political reality settles in, resisters are asking a follow-up question: What else can I do? L.A. Kauffman’s new book Direct Action provides some answers.”
—Maya Singer, Vogue

“L.A. Kauffman may have the best-timed book release in years.”
—The Atlantic

“In Direct Action, L.A. Kauffman assesses movements of the past half century not as scattered uprisings but as phases of an overarching project … Our current radical-action culture, she thinks, really started in the early seventies, when a new generation of green shoots rose up from the ash.”
—Nathan Heller, New Yorker

“If direct action is ‘a laboratory for political experimentation and innovation,’ as Kauffman argues in the introduction, then this is the lab report.”
—Vice

“You could not ask for a better guide through recent social movement history than L.A. Kauffman. A champion of radical causes with decades of experience on the front lines of civil disobedience, she chronicles the fascinating evolution of a set of protest tactics today’s activists take for granted. Kauffman has done a tremendous public service: by helping us better understand the past, in all its glory and folly, we can be more effective dissidents and rabble-rousers tomorrow. This startling, inspiring book is for anyone who has ever felt the urge to put their body on the line and shut things down for something they believe in.”
—Astra Taylor, author of The People’s Platform and co-founder of the Debt Collective

“The lurid circus sideshow has seized center ring in Washington, making direct action by progressive agitators all across the country more essential than ever. Don’t agonize, organize! How to do it? Kauffman’s powerful book, drawing on our people's recent history, shows the way to create true justice for all.”
—Jim Hightower, author and activist

“In a genuinely invigorating book for these times, L.A. Kauffman positively reassesses the efficacy of leftist protest movements since the ’60s, beginning with a re-examination of the ’60s itself. This book is a must-read for anyone looking for a way forward.”
—Dana Snitzky,Longreads

“This intricate book deserves careful reading. Far from being just a catalogue of actions, it traces the ways in which radical movements, linked by their use of civil disobedience, have adapted to contemporary demands.”
—Peace News


“L.A. Kauffman’s valuable book is both a thematic history of a period and a dramatic exploration of the chaning repertoire of protest tactics used by the American movements of the radical left. Beginning with the May 3, 1971 ‘Mayday’ anti–Vietnam War demonstration in Washington, DC, the book concludes with Black Lives Matter and the use of direct action in the 2014 resistance to racist police practices in Ferguson, Missouri. Consideration of times and techniques is integrated into four roughly chronological chapters which answer the book’s essential question: ‘What happened to the American left after the sixties?’”
—Matthew Schultz,Socialism and Democracy

L.A. Kauffman has spent more than 30 years immersed in radical movements, as an organizer, strategist, journalist, and observer. Kauffman was the mobilizing coordinator for the massive anti-war marches of 2003-2004; she has been called a “virtuoso organizer” by journalist Scott Sherman for her role in saving community gardens and public libraries in New York City from developers. Her writings on grassroots activism and social movement history have been published in The Nation, Mother Jones, n+1, The Baffler, and many other outlets. She is currently involved in a range of initiatives to resist the Trump presidency.
Loading...
or support indie stores by buying on