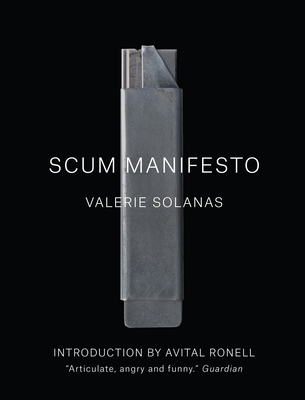 “Life in this society being, at best, an utter bore and no aspect of society being at all relevant to women, there remains to civic-minded, responsible, thrill-seeking females only to overthrow the government, eliminate the money system, institute complete automation and destroy the male sex.”

Outrageous and violent, SCUM Manifesto was widely lambasted when it first appeared in 1968. Valerie Solanas, the woman who shot Andy Warhol, self-published the book just before she became a notorious household name and was confined to a mental institution. But for all its vitriol, it is impossible to dismiss as the mere rantings of a lesbian lunatic. In fact, the work has proved prescient, not only as a radical feminist analysis light years ahead of its time—predicting artificial insemination, ATMs, a feminist uprising against underrepresentation in the arts—but also as a stunning testament to the rage of an abused and destitute woman.

In this edition, philosopher Avital Ronell’s introduction reconsiders the evocative exuberance of this infamous text.

Valerie Jean Solanas (1936–88) was an American radical feminist writer who is best known for SCUM Manifesto, as well as for the attempted murder of artist Andy Warhol.

Avital Ronell teaches at New York University, The European Graduate School and Paris VIII, and is the author of many books including The Test Drive.
or support indie stores by buying on