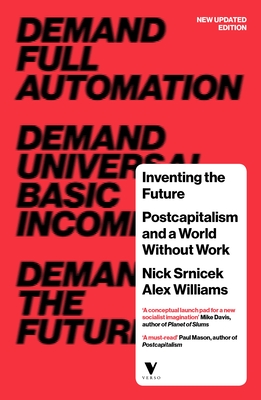 This major new manifesto offers a “clear and compelling vision of a postcapitalist society” and shows how left-wing politics can be rebuilt for the 21st century (Mark Fisher, author of Capitalist Realism)

Inventing the Future is a bold new manifesto for life after capitalism. Against the confused understanding of our high-tech world by both the right and the left, this book claims that the emancipatory and future-oriented possibilities of our society can be reclaimed. Instead of running from a complex future, Nick Srnicek and Alex Williams demand a postcapitalist economy capable of advancing standards, liberating humanity from work and developing technologies that expand our freedoms.

This new edition includes a new chapter where they respond to their various critics.

Praise For Inventing the Future (revised and updated edition): Postcapitalism and a World Without Work…

Alex Williams is a lecturer in the sociology department at City, University of London. He is the author of the forthcoming Hegemony Now (with Jeremy Gilbert).
Loading...
or support indie stores by buying on
(This book is on backorder)