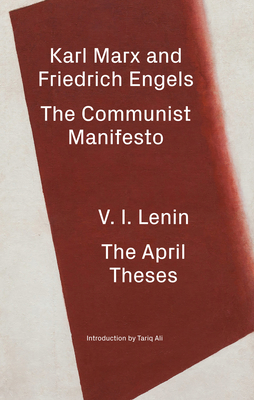 The Communist Manifesto / The April Theses

It was the 1917 Russian Revolution that transformed the scale of The Communist Manifesto, making it the key text for socialists everywhere. On the centenary of this upheaval, this volume pairs Marx and Engels’s most famous work with Lenin’s own revolutionary manifesto, “The April Theses,” which lifts politics from the level of everyday banalities to become an art-form.

“Oppressor and oppressed, stood in constant opposition to one another, carried on an uninterrupted, now hidden, now open fight, a fight that each time ended, either in a revolutionary reconstitution of society at large, or in the common ruin of the contending classes.”

The Communist Manifesto is the most influential political text ever written—few other calls to action have stirred and changed the world. Now, in the wake of a punishing financial crisis, in a world built on regimes of permanent austerity, each rife with horrific disparities in wealth, this short book remains a reference point for those trying to understand the transformations being wrought by capitalism and its concomitant forms of exploitation.

This centenary edition includes a new introduction by Tariq Ali, contextualizing the period—the eve of the 1848 revolutions—in which Marx and Engels penned their masterpiece and argues that it desperately needs a successor.

“The chain breaks first at its weakest link.”

In Lenin’s “April Theses,” written in 1917, he presented his ten analytical maxims, outlining a programme to accelerate and complete the revolution that had begun in February of that year. Now, on the revolution’s centenary, Verso presents them here alongside Lenin’s ‘Letters from Afar’, written in exile that March and addressed to his comrades in Petrograd. In these missives, he offers advice and instruction to comrades pushing ahead with their ideals in the aftermath of the February revolution.

The introduction by Tariq Ali traces The Communist Manifesto’s influence on Lenin’s “April Theses,” the text that brought the manifesto to life and made it one of the most widely read books in history. For Lenin, writes Ali, it was the birth of imperialism, the legitimate offspring of capitalism, that signalled the end of the latter’s “progressive capacities.”

Karl Marx was born in 1818. In 1848 he collaborated with Friedrich Engels in writing The Communist Manifesto. Expelled from Prussia in the same year, Marx took up residence first in Paris and then in London where, in 1867 he published his magnum opus Capital. A co-founder of the International Workingmen's Association in 1864, Marx died in London in 1883.

Friedrich Engels was born in 1820. He moved to England in 1842 to work in his father's Manchester textile firm. After joining the fight against the counter revolution in Germany in 1848 he returned to Manchester and the family business. In subsequent years he provided financial support for Marx and edited the second and third volumes of Capital. He died in 1895.
Loading...
or support indie stores by buying on
(This book is on backorder)