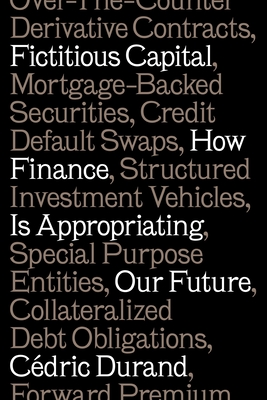 How Finance Is Appropriating Our Future

How finance is a mechanism of social and political domination

The 2007–08 credit crisis and the long recession that followed brutally exposed the economic and social costs of financialization. Understanding what lay behind these events, the rise of “fictitious capital” and its opaque logic, is crucial to grasping the social and political conditions under which we live. Yet, for most people, the operations of the financial system remain shrouded in mystery.

In this lucid and compelling book, economist Cédric Durand offers a concise and critical introduction to the world of finance, unveiling the truth behind the credit crunch. Fictitious Capital moves beyond moralizing tales about greedy bankers, short-sighted experts and compromised regulators to look at the big picture. Using comparative data covering the last four decades, Durand examines the relationship between trends such as the rise in private and public debt and the proliferation of financial products; norms such as our habitual assumptions about the production of value and financial stability; and the relationship of all this to political power.

Fictitious Capital offers a stark warning about the direction that the international economy is taking. Durand argues that the accelerated expansion of financial operations is a sign of the declining power of the economies of the Global North. The City, Wall Street and other centres of the power of money, he suggests, may already be caked with the frosts of winter.

Praise For Fictitious Capital: How Finance Is Appropriating Our Future…

“Cédric Durand is among the most promising of young French university economists today. We awaited the publication of his new book with bated breath. It was worth the wait. Fictitious Capital is an important intervention which tries to make sense of the excesses of capitalism over the last forty years and of the development of finance.”
—Jacques Sapir

“Durand has provided a very insightful view of finance-driven capitalism over the last three decades. Why was it able to prosper alongside sagging investment and plummeting productivity gains? The answer, argues Durand, lies in the tight connection between the shareholder value principle and the globalization of the real economy.”
—Michel Aglietta

“Fictitious Capital is a fascinating and extremely informative exploration of the destructive role of finance in our contemporary political economy. Filled with brilliant insights and an impressive historical and theoretical reach, Durand explains and utilizes Marx's concept of ‘fictitious capital’ to illuminate the inner workings of contemporary global capitalism and to pierce the murky veil that mainstream economics and neo-liberal thought has long used to hide and distort the powerful role of finance. Students trying to understand the precarious political and economic position in which we find ourselves, as well as the theoretical foundations for understanding this, will learn much from this well-written, data rich, and theoretically clear exposition. If you read this terrific book, you will come away well-armed for the struggle ahead.”
—Gerald Epstein

Cédric Durand teaches Economics and Development Theories at the University of Paris 13 and the EHESS. Working within the tradition of Marxist and French Regulationist political economy, he is the author of several articles on the euro–crisis, the financialization-globalization nexus and the post-Soviet transformation. He is a member of the editorial board of the radical online journal ContreTemps.
Loading...
or support indie stores by buying on
(This book is on backorder)