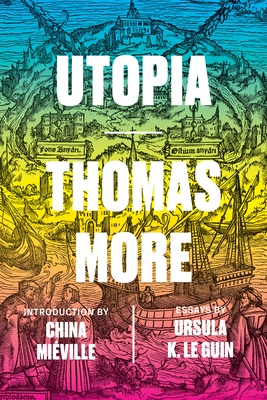 Five hundred years since its first publication, Thomas More’s Utopia remains astonishingly radical and provocative. More imagines an island nation where thousands live in peace and harmony, men and women are both educated, and property is communal. In a text hovering between fantasy, satire, blueprint and game, More explores the theories and realities behind war, political conflicts, social tensions and redistribution, and imagines the day-to-day lives of a citizenry living free from fear, oppression, violence and suffering.

But there has always been a shadow at the heart of Utopia. If this is a depiction of the perfect state, why, as well as wonder, does it provoke a growing unease?

In this quincentenary edition, published in conjunction with Somerset House, More’s text is introduced by multi-award-winning author China Miéville and accompanied by four essays from Ursula K. Le Guin, today’s most distinguished utopian writer and thinker..

“We can’t do without this book. We are all and have always been Thomas More’s children.”
—China Miéville

“I am offered the Grand Inquisitor’s choice. Will you choose freedom without happiness, or happiness without freedom? The only answer one can make, I think, is: No.”
—Ursula K. Le Guin

Sir Thomas More (1478–1535) was a counsellor to Henry VIII of England and a revered Renaissance humanist scholar. He was executed for refusing to acknowledge the king as head of the Church of England and was eventually canonized by the Catholic Church as a result.

China Miéville is the award-winning author of numerous works of fiction and non-fiction, including the The City and The City and This Census-Taker.
Loading...
or support indie stores by buying on