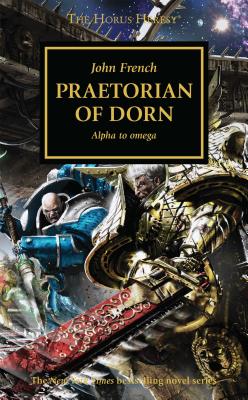 Terra comes under attack from an enemy within as the Imperial Fists and Rogal Dorn prepare for the coming of Horus.

Recalled from the Great Crusade after Ullanor, Rogal Dorn and the VII Legion were appointed as the Emperor’s praetorians, but only after the Warmaster Horus' treachery was revealed did the full extent of that sacred duty become apparent. Now, the Solar System comes under attack for the first time since the war began, and many of the seemingly impregnable defences wrought by Dorn and his Imperial Fists Legion prove inadequate. With all eyes fixed firmly upon this new threat beyond the gates of Terra, who in turn will protect Dorn from the enemy within?

John French is the author of several Horus Heresy stories including the novels The Solar War, Praetorian of Dorn, Tallarn and Slaves to Darkness, the novella The Crimson Fist, and the audio dramas Dark Compliance, Templar and Warmaster. For Warhammer 40,000 he has written Resurrection, Incarnation and Divination for The Horusian Wars and three tie-in audio dramas – the Scribe award-winning Agent of the Throne: Blood and Lies, as well as Agent of the Throne: Truth and Dreams and Agent of the Throne: Ashes and Oaths. John has also written the Ahriman series and many short stories.
or support indie stores by buying on
Copyright © 2020 American Booksellers Association