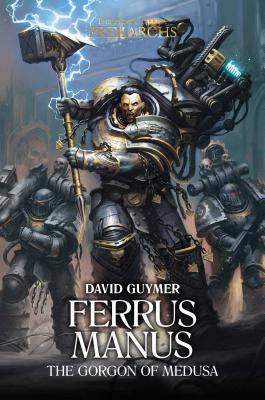 The Gorgon of Medusa (The Horus Heresy: Primarchs #7)

Ferrus Manus, primarch of the Iron Hands, employs his brutal methods of war to bring a world to heel in the Emperor's name.

The Great Crusade has swept across half the galaxy, a million human worlds now embracing the truth and reason that comes with allegiance to the rule of Terra. But even such unparalleled success comes at a cost. Rumours abound that the Emperor plans to step back from the Crusade and raise one of his primarch sons to lead in his stead. Faced with the bitterly non-compliant human empire of Gardinaal and a leaderless host of Ultramarines, Thousand Sons and Emperor’s Children at his Legion’s command, the Iron Hands primarch Ferrus Manus decides to make an example that even the Emperor cannot ignore.

In addition to a plethora of short stories set in the worlds of both Warhammer and Warhammer 40,000, David Guymer is the author of the Realmgate Wars fantasy novel Mortarch of Night and the Gotrek & Felix novels City of the Damned, Kinslayer and Slayer. For Warhammer 40,000, he is the author of the Iron Hands novel The Eye of Medusa, along with two volumes in The Beast Arises series: Echoes of the Long War and The Last Son of Dorn. He is a freelance writer and occasional scientist based in Yorkshire's East Riding, and was a finalist in the 2014 David Gemmell Legend Awards for his Warhammer fantasy novel Headtaker.
or support indie stores by buying on
Copyright © 2020 American Booksellers Association