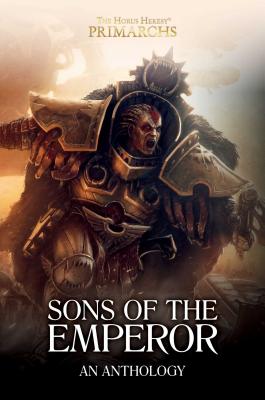 Sons of the Emperor

An Anthology (The Horus Heresy: Primarchs)

From their shadowed origins to the desperate battles that ensued when half of them rebelled against their father, the Sons of the Emperor – the vaunted primarchs – were among the greatest of humanity's champions, warriors without peer and heroes whose deeds became legend. From the Angel Sanguinius, who took the sole brunt of his Legion's most brutal acts, to Vulkan, whose humanity made him unique amongst his brothers, and from dour Perturabo, architect, inventor and murderous warlord, to Horus, whose shining light was eclipsed only by the darkness that grew within his soul, this anthology covers eight of the primarchs and their greatest – or darkest – deeds.

John French is the author of several Horus Heresy stories including the novels The Solar War, Praetorian of Dorn, Tallarn and Slaves to Darkness, the novella The Crimson Fist, and the audio dramas Dark Compliance, Templar and Warmaster. For Warhammer 40,000 he has written Resurrection, Incarnation and Divination for The Horusian Wars and three tie-in audio dramas – the Scribe award-winning Agent of the Throne: Blood and Lies, as well as Agent of the Throne: Truth and Dreams and Agent of the Throne: Ashes and Oaths. John has also written the Ahriman series and many short stories.

L J Goulding is the author of the Horus Heresy audio drama The Heart of the Pharos, while for Space Marine Battles he has written the novel Slaughter at Giant's Coffin and the audio drama Mortarion's Heart. His other Warhammer fiction includes 'The Great Maw' and 'Kaldor Draigo: Knight of Titan', and he has continued to explore the dark legacy of Sotha in 'The Aegidan Oath' and Scythes of the Emperor: Daedalus. He lives and works in the US.

Guy Haley is the author of the Siege of Terra novel The Lost and the Damned, as well as the Horus Heresy novels Titandeath, Wolfsbane and Pharos, and the Primarchs novels Konrad Curze: The Night Haunter, Corax: Lord of Shadows and Perturabo: The Hammer of Olympia. He has also written many Warhammer 40,000 novels, including Belisarius Cawl: The Great Work, Dark Imperium, Dark Imperium: Plague War, The Devastation of Baal, Dante, Darkness in the Blood, Baneblade and Shadowsword. His enthusiasm for all things greenskin has also led him to pen the eponymous Warhammer novel Skarsnik, as well as the End Times novel The Rise of the Horned Rat. He has also written stories set in the Age of Sigmar, included in War Storm, Ghal Maraz and Call of Archaon. He lives in Yorkshire with his wife and son.
Loading...
or support indie stores by buying on