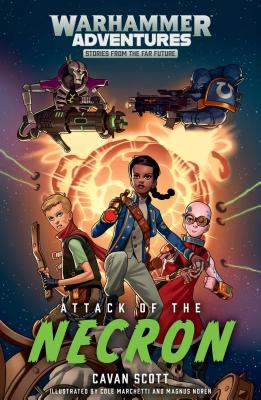 The first book in the Warped Galaxies series. An exciting new series of sci-fi books for middle-grade reeaders from Black Library. Brave champions and the forces of the Imperium battle alien beasts and mechanical tyrants accross the gulf of space.

On the hive world of Targian, Zelia Lor helps her mother search for ancient tech, digging up treasures of the past on the wind-blown plains. They are happy. They are safe. All that changes when the Necrons attack. Without warning, a host of robotic ships appear in the skies above Targian and rip the planet apart. Separated from her mother, Zelia must escape the doomed world, her only hope a scrambled transmission promising safety at a mysterious place known only as the Emperor’s Seat. Launched in an escape pod, she crashes on an icy wasteland far, far from home. But Zelia is not alone. She is joined by a rag-tag group of survivors – the street-tough juve Talen, gadget-obsessed Martian boy Mekki and super-intelligent alien-ape, Fleapit.

Cavan Scott has written for such popular franchises as Star Wars, Doctor Who, Judge Dredd, LEGO DC Super Heroes, Penguins of Madagascar, Adventure Time and many, many more. The writer of a number of novellas and short stories set within the Warhammer 40,000 universe, including the Warhammer Adventures: Warped Galaxies series, Cavan became a UK number one bestseller with his 2016 World Book Day title, Star Wars: Adventures in Wild Space ­– The Escape. Find him online at www.cavanscott.com
or support indie stores by buying on
Copyright © 2020 American Booksellers Association