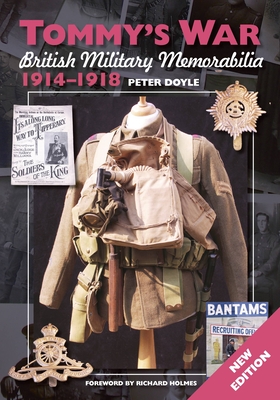 The First World War has left an almost indelible mark on history, with battles such as the Somme and Passchendaele becoming watchwords for suffering unsurpassed. The dreadful fighting on the Western Front, and elsewhere in the world, remains vivid in the public imagination.

Over the years dozens of books have been published dealing with the soldier's experience, the military history and the weapons and vehicles of the war,  but there has been little devoted to the objects associated with those hard years in the trenches. Tommy's War (new in paperback) redresses that balance. With hundreds of carefully captioned photographs of items that would have been part of the everyday life for the British Tommy; from recruiting posters, uniforms and entrenching equipment to games, postcards and pieces of 'trench art,' this book brings to life the experience of the Great War soldier through the objects with which he would have been surrounded.

Peter Doyle is a military historian and author who has written widely on the First World War. He is a visiting Professor at University College London and is co-secretary of the All-Party Parliamentary War Heritage Group. He lives in Essex.