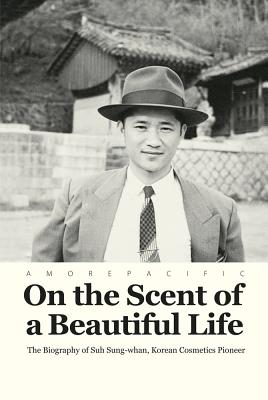 On the Scent of a Beautiful Life (Hardcover)

This is the truly inspiring story of Suh Sung-whan, an entrepreneur who grew up in Gaeseong in North Korea, left school at the age of sixteen, and subsequently transformed a small family business into a multi-million dollar global cosmetics corporation, AmorePacific, famous for its perfumes and cosmetics across the world.

When Suh Sung-whan was a young boy in the 1930s, his mother supported their family by mixing and selling hand-pressed hair treatment oils, created from camellia nut trees. Inspired by his mother, he quickly learned the skills for developing and selling these products, and earned himself a spot in the first department store to open in Gaeseong – a sign of the big things to come.

Suh Sung-whan soon experienced a major setback however, when he was called up to fight with the Japanese during World War II. Following Korea’s liberation in 1945, he made a fully-fledged entry into business, expanding the company, now known as AmorePacific, both in Korea and worldwide. As well as developing a hugely successful cosmetics business, he also dedicated time to developing green tea farms in the Jeju and Honam regions, and launched OSulloc, his own tea company.

This is the fascinating story of how a young boy took a small family business and developed it into a global company, which has been at the forefront of booming trade in Korea.

Han Mi-ja was born in 1962 in Hwaseong, Gyeonggido. She wrote and published many books on the history and legacy of the company, including A Beautiful Commitment: Osulloc Story, and Journey of Beauty: Spring, Brook, River and Ocean (a corporate history of AmorePacific). She died in 2015.
or
Not Currently Available for Direct Purchase
Copyright © 2020 American Booksellers Association