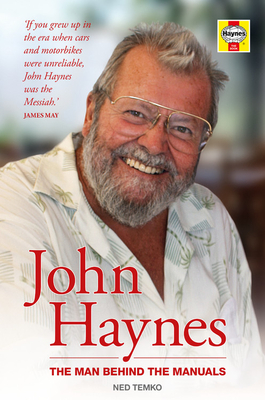 The Man Behind the Manuals

This fascinating and inspiring biography of John H Haynes – the man behind Haynes Manuals – looks ‘under the bonnet’ at his extraordinary life, and his legacy to the motoring world. This is the story of how one man’s vision and enthusiasm gave a small enterprise in rural Somerset a global footprint.

The author, Ned Temko, has spent many hours with the Haynes family, uncovering the rich and varied life that passionate motoring enthusiast John Haynes led. The story begins with John’s childhood in Ceylon and his school days – when as a young entrepreneur he sowed the seeds for what would become the iconic Haynes car-repair manuals – to his time as a young RAF officer, and then as the driving force behind the growth of the iconic Haynes brand and the Haynes International Motor Museum.

What makes John’s story especially compelling is that the idea for his car Owners’ Workshop Manuals didn’t emerge fully formed. It wasn’t a product of business school, or consumer focus groups. Just as the roots of Steve Jobs’s Apple Mac can be traced to his personal urge to build the most perfect personal computer he could imagine, Haynes’s journey began when, as a teenaged schoolboy, he was dead set on figuring out how to turn the remains of an old Austin he’d found in a scrap yard into a fully working sports car. The simple booklet he produced about building this 750 Special was the spark that would eventually result in the building of a global brand.

This biography will appeal not only to motoring enthusiasts, but a wider audience who will be intrigued by the story of the Haynes family and the business dynamics - exploring the evolution of a global, yet truly British company and brand, led and overseen by John Haynes for 59 years.

Ned Temko began his journalistic career in 1975, in post-revolutionary Portugal. After a brief posting in Brussels, he was based in Beirut, Moscow, Jerusalem and Johannesburg for the American newspaper The Christian Science Monitor before being transferred to London, where he has lived and worked since. He was editor at the Jewish Chronicle for 15 years, during which it won unprecedented national recognition. In 2005, he joined The Observer as its Chief Political Correspondent. Since 2008, while continuing to make broadcast appearances as an analyst and commentator on the BBC and Sky, he has ghosted and edited a number of political memoirs and business books. He is also the author of To Win or To Die, a biography of the former Israeli Prime Minister, Menachem Begin, and writes a regular international-affairs column for the Monitor.