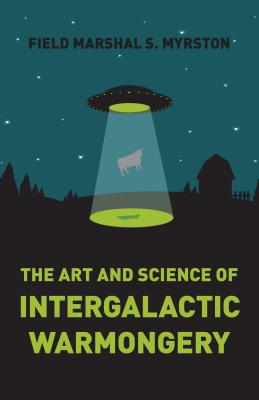 The Art and Science of Intergalactic Warmongery

As a young cadet, Private Myrston led troops against the Victoriana rebellion where he earned a reputation as a fearless soldier and cunning tactician. His meteoric rise to Emperor of the Molagrian Empire was paved with sound battle strategies, a winning smile and clever assassinations of several superior officers. As emperor, he sought out and engaged in countless conflicts with a multitude of sentient lifeforms during his reign. It was during this period that he mastered several forms of invasion, administration and religious manipulation for profit. In this text, Myrston has plagiarized wildly from Molagrian and Nebraxian classic texts infinitely better than this one to provide a concise set of tenants guaranteeing intergalactic success. Learn how to take control of the planet, establish a government that suits your needs and then seek out and annihilate exotic, intelligent lifeforms throughout the galaxy.

Myrston, a recent immigrant to Earth, has taken human form and now consults for several despots where his skills in planning and executing invasions has helped them in some of their more recent endeavors. In his spare time he enjoys reading human military history, brewing and drinking coffee and rutting with cheap prostitutes. He is the author of the highly unsuccessful: Why your children are going to kill and eat you; and the autobiographical love story that helped to reintroduce spontaneous book burnings in several countries: Crumbs from Mereika's Table.
Loading...
or
Not Currently Available for Direct Purchase