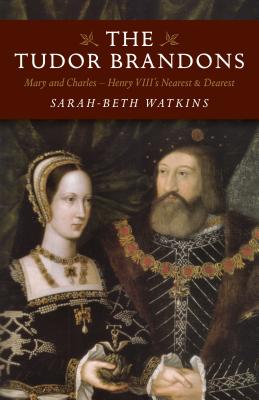 This fascinating book studies the life and times of Mary Tudor and Charles Brandon, Henry VIII's dearest sister and his closest companion. Charles rose from being Henry's childhood friend to becoming the Duke of Suffolk; a consummate courtier and diplomat. Mary was always royalty. At first married to the King of France, Mary quickly wed Charles after Louis XII's death in 1515, against her brother's wishes. Their actions could have been construed as treason yet Henry chose to spare their lives. They returned to court and despite their ongoing disagreements throughout the years, especially over the king's marriage to Anne Boleyn, the Tudor Brandons remained Henry's most loyal subjects and perhaps more importantly, his beloved family.

Sarah-Beth Watkins works in publishing and has a BA in Social Policy. She grew up in Richmond, Surrey and began soaking up history from an early age. Her love of writing has seen her articles published in various publications over the past twenty years. Her history works are Ireland's Suffragettes, Lady Katherine Knollys: The Unacknowledged Daughter of King Henry VIII and The Tudor Brandons.
Loading...
or
Not Currently Available for Direct Purchase