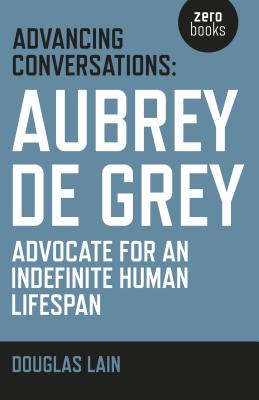 Advancing Conversations is a line of interview books documenting conversations with artists, authors, philosophers, economists, scientists, and activists whose works are aimed at the future and at progress. The biogerontologist Aubrey de Grey, as the world's pre-eminent longevity advocate, is nothing if not future oriented. De Grey is the founder of the SENS Research Foundation, an organization developing medical interventions to repair the damage the body does to itself over time. Stated more directly, Aubrey de Grey and his organization aim to defeat aging. In 2005 a panel of scientists and doctors from MIT, Brigham and Women's Hospital in Boston, Microsoft, and the Venter Institute participated in a contest to judge whether de Grey's "Strategies for Engineered Negligible Senescence" were worthy of debate and verification or whether these ideas were wrong on their face. The panel found that de Grey's proposals for intervening in the aging process, while speculative, often "ran parallel to existing research" and were not "demonstrably wrong.

Douglas Lain is the publisher of Zero Books. He is also a writer, blogger, and the podcaster behind Zero Squared.
Loading...
or
Not Currently Available for Direct Purchase