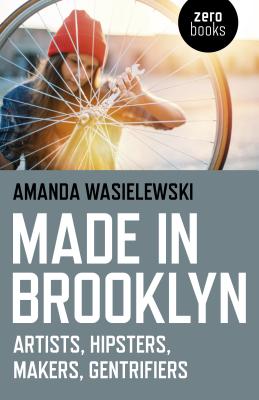 Made in Brooklyn provides a belated critique of the Maker Movement: from its origins in the nineteenth century to its impact on labor and its entanglement in the neoliberal economic model of the tech industry. This critique is rooted in a case study of one neighborhood in Brooklyn, where artists occupy former factory buildings as makers. Although the Maker Movement promises to revitalize the city and its dying industrial infrastructure by remaking these areas as centers of small-scale production, it often falls short of its utopian ideals. Through her analysis of the Maker Movement, the author addresses broader questions around the nature of artistic work after the internet, as well as what the term 'hipster' means in the context of youth culture, gentrification, labor, and the influence of the internet. Part history, part ethnography, this book is an attempt to provide a unified analysis of how the tech industry has infiltrated artistic practice and urban space.

Amanda Wasielewski is an artist and Lecturer in Media Studies at the University of Amsterdam. She is a doctoral candidate in Art History at the Graduate Center CUNY and has previously taught at Lehman College and the Spitzer School of Architecture at City College in New York. She has exhibited her artwork internationally at venues including De Hallen Museum, De Appel Arts Centre, and Bloomberg New Contemporaries. Her writing has appeared in the journals History of Photography and Peregrinations, the Towner, 3: AM Magazine, and Peer Paper Matters
Loading...
or
Not Currently Available for Direct Purchase