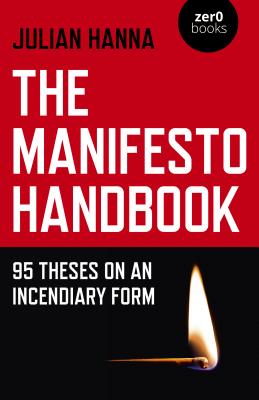 95 Theses on an Incendiary Form

The Manifesto Handbook describes the hidden life of an undervalued genre: the conduit for declarations of principle, advertisements for new "isms," and provocations in pamphlet form. Often physically slight and small in scale, the manifesto is always grand in style and ambition. A bold, charismatic genre, it has founded some of the most important and revolutionary movements in modern history, from the declaration of wars and the birth of nations to the launch of countless social, political and artistic movements worldwide. Julian Hanna provides a brief genealogy of the genre, analyses its complex speaking position, traces the material process of manifesto making from production to dissemination, unpacks its extremist underbelly, and follows the twenty-first century resurgence of the manifesto as a re-politicised and reinvigorated digital form.

Julian Hanna is Assistant Professor at Madeira Interactive Technologies Institute, Portugal. His work focuses on critical intersections between culture, politics and technology. After completing his PhD at the University of Glasgow, he taught at the University of British Columbia and the University of Lisbon. Hanna's writing often appears in academic journals and magazines such as The Atlantic, 3: AM and Minor Literature[s]. He co-authors the Crap Futures blog with the designer James Auger; in 2017 their work won the CCCB Cultural Innovation International Prize. Hanna lives in Funchal, Portugal
Loading...
or
Not Currently Available for Direct Purchase