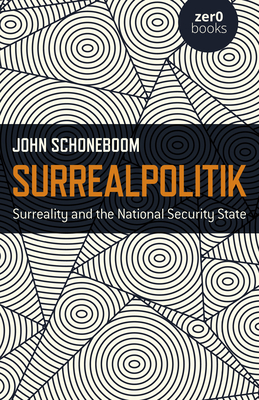 Surreality and the National Security State

Our times are not just weird, but literally surreal: we live in a paranoid, increasingly authoritarian culture in which the real, the presumed and the purported are indistinguishable strands of a dense hallucinatory web of mediated spectacles. Surrealpolitik takes up cultural theorist Mark Fisher's challenge to expose capitalist realism's 'realism' as nothing of the sort. To subject the symbolic order to a surrealist mode of inquiry is to transgress taboos, reveal biases and inconsistencies, test assumptions and investigate the extent to which the real is, like our dreams - a fungible projection of our unconscious expectations. The nexus of dreams, hyperreality, paranoia, totalitarianism, terror, art, myth and culture is where realpolitik becomes the surrealpolitik of the title.

John Schoneboom is the founding editor of Bratum Books' Uncommonalities series of short stories that share a common first line, to which he also shamelessly contributes his own efforts. He holds MAs in creative writing (Northumbria) and science, technology, and international affairs (George Washington University) and a BA focusing on US foreign policy in Central America (Hampshire College). Originally from New York, Schoneboom now resides in Newcastle upon Tyne, UK.
Loading...
or support indie stores by buying on