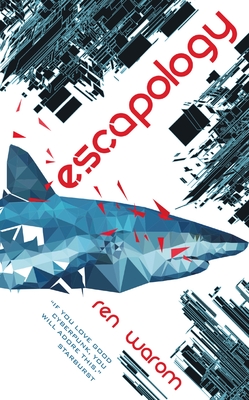 SHOCK PAO is not just any Haunt—he’s the best. There isn’t a system that he can’t crack into, nothing he can’t steal for the right price. Outside the virtual world of the Slip, though, he’s a Fail—no degree, no job, no affiliations to protect him from angry ex-customers. Of which he has quite a few. So when his ex brings Shock a job, he accepts, little realizing that it will turn out to be his most impossible, illegal and insane assignment yet.
Amiga works for Twist Calhoun, one of the toughest crime lords in the Gung, as a Cleaner—assassin. When Shock’s war comes to her, she doesn’t have a choice: it’s her job to bring him to Twist, dead or alive—or it’ll be her head in a bag in Twist’s vault.

"Warom makes an impressive debut with this action-packed, post-apocalyptic, postmodern adventure...The diverse characters and well-crafted setting breathe fresh life into the cyberpunk subgenre. Warom’s language is dense, full of slang and complex character voices, but rewarding for its difficulty....readers will appreciate that this tale defiantly carves out its own identity."
-- Publishers Weekly

“Will keep you on the edge of your seat...every page offers new twists and turns” - Bio Gamer Girl

“A flaming loop-the-loop rollercoaster with no brakes” - NPR

“Warom crafts an inventive world that upends familiar tropes, spinning a fast-moving plot that races from what threat to the next in breathless, laser-bright prose.” -  Barnes & Noble

"If you're in need of an addictive, fast-paced and immersive cyberpunk novel with thriller elements, you don't have to look elsewhere." -  Rising Shadow

“I recommend...that you read Escapology in the quietest setting possible. An isolation tank. A desert island. Swaddled in cotton wool in the basement of the British Library. You need to do this as a counterbalance to the heroic and possibly toxic amounts of adrenaline that reading it is likely to release." - Lit Reactor

“I can’t recommend this book enough. It gets really weird, really fast…and that what makes it such a fun read.” - Nerdspan

“If you want some fast-paced, gritty and super imaginative cyberpunk, that's (ESCAPOLOGY) the one to look out for.” - Shelf Awareness

Ren Warom lives in the West Midlands with her three children, innumerable cats, a very friendly corn snake, and far, far too many books. She haunts Twitter as @RenWarom, and can be found on her YouTube channel talking about mental health issues and, of course, books
Loading...
or
Not Currently Available for Direct Purchase