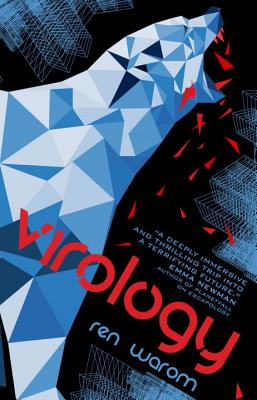 It’s been four weeks since Shock Pao broke open the virtual world of the Slip. With the stolen bio-ware Emblem in his head, he controls all the world’s systems, and so the shadiest characters in Foon Gung are desperate to track him down. Shock and the Hornets are running out of places to hide.

Meanwhile, the Patient Zeros’ cryptic illness is worsening. The source of the disease points to the distant hubs; Earth’s former cities snatched up and sent into orbit. With their pursuers nearing and time running out to find the cure, the Hornets flee skywards, from the insane underworld of Tokyo to the throngs of New York, all the time moving towards an evil that makes Hive Queens look like garden insects.


“Virology takes the neon-soaked new-weird cyberpunk riot of its predecessor and turns the volume way, way up...establishing herself as one of the most unusual and kinetic new voices in the genre.” Barnes & Noble SFF blog


“Virology is a fun trip down cyberpunk lane, complete with corporate abuses, rebellious youth, and rage against a system that is stacked against the protagonists”  Hey Poor Player


“I’m actually envious of anyone who is starting the series now since you didn’t have to wait nearly a year like I did to see how the story would play out”  sciencefiction.com

Ren Warom lives in the West Midlands with her three children, innumerable cats, a very friendly corn snake, and far, far too many books. She haunts Twitter as @RenWarom, and can be found on her YouTube channel talking about mental health issues and, of course, books.
Loading...
or
Not Currently Available for Direct Purchase