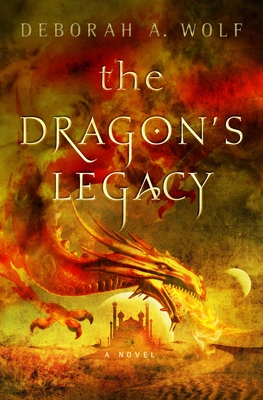 By Deborah A. Wolf

Epic fantasy in the tradition of Guy Gavriel Kay and Jacqueline Carey. “A world of large-scale epic fantasy... This is a rare find and not to be missed.” New York Times bestselling author Barb Hendee.

In the heart of the singing desert, the people are fading from the world. Mothers bear few live children, the warriors and wardens are hard-pressed to protect those who remain, and the vash’ai—the great cats who have called the people kithren for as long as there have been stories—bond with fewer humans each year. High above, the Sun Dragon sings a song of life and love while far below, the Earth Dragon slumbers as she has since the beginning of time. Her sleep is fitful, and from the darkness of her dreams come whispers of war… and death.

Sulema is a newly minted warrior of the people and a true Ja'Akari—a daughter of the unforgiving desert. When a mysterious young man appears in her home of Aish Kalumm, she learns that the Dragon King is dying in distant Atualon. As the king fades, so does the magic that sings the Earth Dragon to sleep.

Deborah A. Wolf has some personal knowledge of life as a barbarian warrior, having grown up in a wildlife refuge in Alaska. She later worked as an Arabic linguist for the U.S. Army. Before Wolf’s formative years in Alaska, she spent some of her early years on a deserted island. Wolf has a love of different cultures where she can use those settings to create giant monsters, as well as flora and fauna. Deborah currently lives in Traverse City, Michigan.

"You have to surrender to the domination of the author, and trust that she isn’t just freewheeling. Otherwise you lose that precious sense of depth, which J.R.R. Tolkien, J.K. Rowling and George R.R. Martin were all able to sustain over multiple books... Ms. Wolf [is] off to a good start." -- The Wall Street Journal - Tom Shippey on the best new sci-fi and fantasy

"An intricate story... This book will leave readers with intense curiosity about its different cultures and anxiously awaiting a sequel." —Booklist

"A well-crafted, intricate blend of the politics and magic of multiple cultures." —Publishers Weekly

"A powerful, compelling read that combines elements of epic fantasy with strong storytelling. Reminiscent of the classic fantasy novel Dune, The Dragon’s Legacy is an addictive start to a promising, exciting trilogy....a welcome, desert-scented breath of fresh air, worth devouring, again and again." —Foreword Reviews

“Wolf's debut is ambitious… There are intriguing world building and poignant moments to be found here... Wolf writes for a big screen…” —Kirkus Reviews

"Wolf’s style of storytelling, more nomadic and episodic like the world and people she has created, may be initially challenging for some readers, but the tale’s mysteries, the world’s grandeur, and vivid, strong characters will reward those who persevere. Fantasy fans who crave stories that eschew traditional gender roles, as well as those who find Celtic-analog cultures wearisome, will be pleased with this intriguing new offering." —New York Journal of Books

"True epic fantasy, the kind of rich, multi-layered works that don't just carry you away, but carry you away to a world that you'll want to live in for a long, long time!" —David Farland, New York Times bestselling author of The Runelords

"Plunges you into a rich and vibrant world, filled with magic and intrigue.  A fantastic combination of new, marvelous cultures and grand characters in a story that grips your imagination and pulls you into the windswept desert."  —Sarah Beth Durst, award-winning author of The Queen of Blood.

"A mesmerizing tale of intrigue and magic that is as richly detailed as it is lethally entertaining." —Tina Lecount Myers, author of The Song of All

"This will knock your socks off.  Wolf is rewriting epic fantasy." —Sarah Chorn, Bookworm Blues

"Beautiful and haunting.  A world of large-scale eipic fantasy, in the tradition of Guy Gavriel Kay... This is a rare find and not to be missed." —Barb Hendee, New York Times bestselling author of The Noble Dead

"Wolf's lush and painterly prose is reminiscent of Jacqueline Carey, impelling the reader to savor every sight and sound and smell.  Highly recommended."          —Katherine Kurtz, acclaimed author of the Deryni novels

"This exquisitely written debut novel is one of the best new voices in fantasy I've seen in years. The vividly crafted characters simply force you to care about them, and even those we might easily dismiss as villains show the complications of people who disagree with each other, but are not necessarily evil. Deborah's world is painstakingly crafted, revealing a multi-layered tapestry of history, mythology and culture, all blending into a masterful gestalt.
As we follow the younger generation of her matriarchal desert culture, all grasping for adulthood, they find their hopes and dreams will not quite meet reality, as the explosive secrets and errors of their parents all unfold at once. Now both generations must discover who they can really trust and discover the hidden truths that may allow them to save their homelands from destruction and war." —Duane Wilkins, University Bookstore in Seattle, WA

“Reading it is like watching the works of Wagner and Mozart performed onstage: you connect with the story, it resonates within, its song makes your bones hum like a tuning fork. Make no mistake, this is truly operatic epic fantasy.” -  Barnes & Noble SFF blog

“The Dragon’s Legacy will give you everything you’re looking for and more. I’m looking forward to the next installment.” Black Girl Nerds