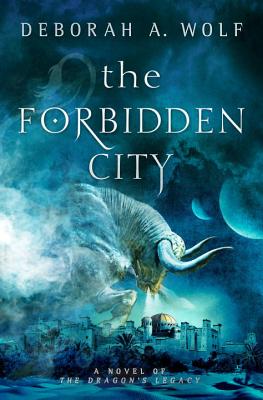 The Forbidden City (The Dragon's Legacy #2)

Sulema Ja'Akari is an elite warrior, one of the desert people known as the Zeeranim. She is also the daughter of the Dragon King of Atualon, whose magic is the only thing that prevents the earth dragon from waking. Should the dragon end her sleep, their world will be destroyed.

The Dragon King is dying. As heir to his throne Sulema must be trained to take his place, yet the more she learns, the less she trusts the sinister agendas that surround her. Knowing that her life hangs in the balance, Sulema seeks to return to the Zeera.

Salvation may lie with her mother, Hafsa Azeina, who walks the dark and deadly pathways of the Dreaming Lands. To save her daughter, the dreamshifter will be forced to strike a pact with her greatest enemy, a huntress who would rather kill her than assist her.

Upheaval stretches far beyond Atualon--to the forbidden city of Khanbul where the emperor rules with an iron hand. An elite cadre of rebel conspirators chafes beneath his rule and plots to overthrow him.

Among them is Jian de Allyr, the half-dae prince born of a human mother and a twilight lord. If they are to challenge the emperor in his stronghold, however, Jian and his co-conspirators must secretly raise an army...

Praise For The Forbidden City (The Dragon's Legacy #2)…

Praise for the DRAGON'S LEGACY Saga

"You have to surrender to the domination of the author, and trust that she isn’t just freewheeling. Otherwise you lose that precious sense of depth, which J.R.R. Tolkien, J.K. Rowling and George R.R. Martin were all able to sustain over multiple books... Ms. Wolf [is] off to a good start.”—The Wall Street Journal

"An intricate story... This book will leave readers with intense curiosity about its different cultures and anxiously awaiting a sequel."—Booklist

"A well-crafted, intricate blend of the politics and magic of multiple cultures."—Publishers Weekly

"A powerful, compelling read that combines elements of epic fantasy with strong storytelling. Reminiscent of the classic fantasy novel Dune, The Dragon’s Legacy is an addictive start to a promising, exciting trilogy....a welcome, desert-scented breath of fresh air, worth devouring, again and again."—Foreword Reviews

“Wolf's debut is ambitious… There are intriguing world building and poignant moments to be found here... Wolf writes for a big screen…”—Kirkus Reviews

"Wolf’s style of storytelling, more nomadic and episodic like the world and people she has created, may be initially challenging for some readers, but the tale’s mysteries, the world’s grandeur, and vivid, strong characters will reward those who persevere. Fantasy fans who crave stories that eschew traditional gender roles, as well as those who find Celtic-analog cultures wearisome, will be pleased with this intriguing new offering."—New York Journal of Books

"True epic fantasy, the kind of rich, multi-layered works that don't just carry you away, but carry you away to a world that you'll want to live in for a long, long time!"—David Farland, New York Times bestselling author of The Runelords

"Plunges you into a rich and vibrant world, filled with magic and intrigue.  A fantastic combination of new, marvelous cultures and grand characters in a story that grips your imagination and pulls you into the windswept desert."—Sarah Beth Durst, award-winning author of The Queen of Blood.

"A mesmerizing tale of intrigue and magic that is as richly detailed as it is lethally entertaining."—Tina Lecount Myers, author of The Song of All

"This will knock your socks off.  Wolf is rewriting epic fantasy."—Sarah Chorn, Bookworm Blues

"Beautiful and haunting.  A world of large-scale eipic fantasy, in the tradition of Guy Gavriel Kay... This is a rare find and not to be missed."—Barb Hendee, New York Times bestselling author of The Noble Dead

"Wolf's lush and painterly prose is reminiscent of Jacqueline Carey, impelling the reader to savor every sight and sound and smell.  Highly recommended."—Katherine Kurtz, acclaimed author of the Deryni novels

“Wolf’s debut fantasy is remarkably assured and deeply detailed, offering a unique universe and a trope-twisting narrative that plays out in unexpected ways.”—Barnes & Noble SFF blog

Deborah A. Wolf has some personal knowledge of life as a barbarian warrior, having grown up in a wildlife refuge in Alaska. She later worked as an Arabic linguist for the US Army. Before Wolf's formative years in Alaska, she spent some of her early years on a deserted island. She has a love of different cultures where she can use those settings to create giant monsters, as well as flora and fauna. Deborah currently lives in northern Michigan.
Loading...
or
Not Currently Available for Direct Purchase