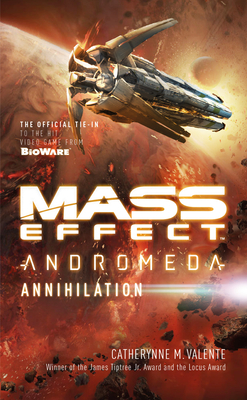 The Quarian ark Keelah Si'yah sails toward the Andromeda galaxy, carrying 20,000 colonists from sundry races including the drell, the elcor, and the batarians. Thirty years from their destination, a routine check reveals drell lying dead in their pods, and a deadly pathogen on board. Soon, the disease is jumping species, and it quickly becomes clear that this is no accident. It's murder, and the perpetrator is still on board.

The ship's systems rapidly degrade, and panic spreads among the colonists, for the virus yields a terrible swelling of the brain that causes madness, hallucinations, and dreadful violence. If the ship's crew can't restore their technology and find a cure, the Keelah Si'yah will never make it to the Nexus.

Catherynne M. Valente is an acclaimed New York Times Bestselling author of fantasy and science fiction novels, short stories, and poetry. She has won or been nominated for every major award in the field, including the Hugo Award (four times), Nebula Award (two times), Locus Award (five times), World Fantasy Award (four times), and the James Tiptree Jr. Award. She is a huge Mass Effect fan and player.

“Annihilation is another great addition to the Mass Effect novel series, featuring quality writing and storytelling...definitely a must-read if you love the games” - BiblioSanctum

“a fast, tense, deeply enjoyable novel in a space opera setting. If you enjoy Mass Effect, I guarantee you’ll like it. I sure as hell did.” - Tor.com
or support indie stores by buying on
Copyright © 2020 American Booksellers Association