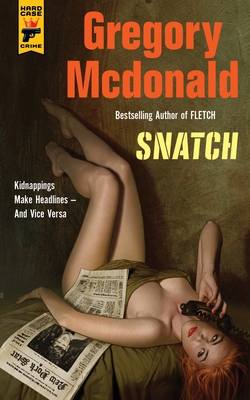 Whether it’s a Middle East oil crisis in the 1970s or the London Blitz during WWII, world events have a way of breeding trouble on the home front, too. That’s how Toby Rinaldi, son of a U.N. Ambassador, wound up kidnapped on his way to a California amusement park, and how Robby Burnes, orphaned son of British nobility, wound up snatched on the snowy streets of New York City. But as Robby’s famous namesake taught us, the best laid plans don’t always work out as intended. Especially not when you’re a kidnapper in the hands of Gregory Mcdonald.

The comic genius behind the Fletch and Flynn books, Gregory Mcdonald also penned the two brilliant kidnapping novels appearing here for the first time in three decades – and the first time ever in a single volume. Two precocious eight-year-old boys…two teams of kidnappers, in way over their heads…two opportunities for mayhem, danger, and the trenchant social satire no crime writer has ever delivered like Mcdonald.

Kidnappings link two exceptional crime novels, Snatched and Safekeeping, by Mcdonald (1937–2008), best known for his Fletch and Flynn series...Both novels showcase Mcdonald’s wit, but it’s the latter that really shows his versatility. Mcdonald gleefully mixes Dickensian characters and Charles Lederer–style dialogue ...This compendium volume will please fans and casual readers alike who want to see the range that Mcdonald was capable of beyond his most famous creations.
—Publishers Weekly (Starred Review)

This twin-pack proves that Mcdonald successfully devoted his creative and satiric energies to stories other than those featuring Fletch or Flynn. So along with the undeniable entertainment they provide, the two novels resurrected in SNATCH might cause fans of Fletch/Flynn to search deeper into Mcdonald’s backlist of published works. —Bookgasm

Hard Case Crime is at it again, and here the publisher combines two books by Gregory Mcdonald that were last published over 30 years ago. Kidnapping is the theme that links both – in Snatched, an eight-year-old called Toby Rinaldi is kidnapped by a thug called Spike to gain leverage on the boy’s father, a diplomat at the UN in New York. The second story, Safekeeping, is about the kidnapping of Robby Burns, a boy of aristocratic heritage who is in New York during World War II for safekeeping. It’s out 7 Feb with a cover to suit its old school pulp content. - Crime Fiction Lovers

"This compendium volume will please fans and casual readers alike who want to see the range that Mcdonald was capable of beyond his most famous creations." - Publishers Weekly

“MacDonald does a truly fine job of blending menace and mirth, and action with cutting social and political commentary.” - Mystery Scene

"Although I enjoyed the second story more than the first, both are pretty good.  Like most of McDonald’s work, it’s an easy ready – suitable for a lazy Sunday afternoon or a day at the beach." -Soap Boxers

"Snatch, as the collection is named, is an excellent jumping-on point for anyone yet to experience the creative genius of Gregory McDonald. For the rest of us, it’s a reminder that it has been a while since we last visited with Fletch." - Reader Dad

"Mcdonald uses the viewpoint of an intelligent child to give a satirical tour of class and race in mid-century US and the satire is at times quite pointed.

But it may be the almost Dickensian parade of people and places that stays in the mind longest.

These are two books that should never be out of print, and at a bargain price."- Morning Star Online

"Wonderfully adept at weaving in new characters, Mcdonald takes a simple melody and orchestrates it into a cacophony of noise. It demands your attention." Hits the Fan

Gregory Mcdonald (February 15, 1937 - September 7, 2008) was an American mystery writer best known for his creation of the character Irwin Maurice Fletcher, an investigative reporter who preferred the nickname "Fletch."

Two of the Fletch books earned Edgar Awards from the Mystery Writers of America: Fletch was named Best First Novel in 1975, and Confess, Fletch won for Best Paperback Original in 1977. This is the only time a novel and its sequel won back-to-back Edgars. Mcdonald would go on to write seven more Fletch novels, including the prequels Fletch Won and Fletch Too. The original book became a 1985 movie of the same name starring Chevy Chase.
Loading...
or
Not Currently Available for Direct Purchase