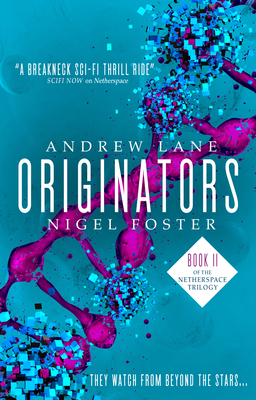 Contact with the alien race, the Gliese, was made forty years ago, but communication with them remains impossible. There is trade, but on seemingly inexplicable terms; anti-gravity technology traded for a bicycle tyre. Human science has become fixated on understanding the alien technology, but with little success. The world may be a better place but it's no longer our own, with mankind dependent on inexplicable Faster-Than-Light technology, controlled by the aliens.

As humanity begins to colonize the stars, we are still dependent on mysterious aliens we do not understand. It falls upon the unlikely team of a conceptual artist, Marc Keislack, and assassin, Kara Jones, to embark on a dangerous mission that will unearth the mystery of the Gliese.

“Though these books are ostensibly space opera, they’re much weirder than what you’ll typically encounter in the genre, and all the better for it” Barnes & Noble SFF blog

Andrew Lane is the author of twenty-nine books and multiple short stories, television scripts and audio dramas. He is perhaps best known for his Young Sherlock series, which have sold to 42 countries. He has also written three well-reviewed adult crime novels under a pseudonym, the first of which has been optioned as a US TV series. He is currently writing another series featuring Doyle's Professor Challenger. He lives in Dorset.
Loading...
or
Not Currently Available for Direct Purchase