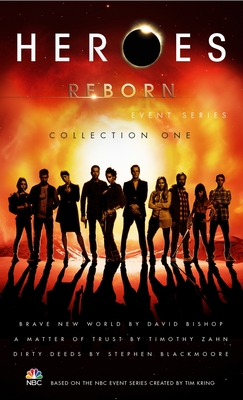 A year after the fateful events of the Odessa Summit, the world is a very different place. It’s certainly no longer friendly for Evolved Humans—or “Evos”—who are held responsible for what happened. If the government doesn’t find you, there are some tenacious and merciless Evo-hunters out there who will.

Based on Tim Kring’s original drafts of the script for the season premiere of Heroes Reborn and includes content not seen in the TV show.

“A MATTER OF TRUST” BY TIMOTHY ZAHN

As the number of Evolved Humans increases, so does the pressure from the governments and people of the world. Father Mauricio begins searching for a way to help all Evos after befriending a troubled teenager who possesses a devastating secret. As a priest, it is Father Mauricio’s calling to protect the innocent and this includes the Evos who, by no fault of their own, find their lives and freedom being threatened.

A veteran Federal agent begins investigating the involvement of ruthless Los Angeles Police Department detective James Dearing in the death of an Evolved Human. But when she gets close to uncovering a dangerous truth, it could cost him everything: his job, his freedom, maybe even his life.

David Bishop lectures in creative writing at Napier University. He has written several novels, as well as writing  radio and TV dramas for the BBC and having graphic novels published in four languages.

Timothy Zahn is the New York Times bestelling author of the Terminator Salvation Prequel: From the Ashes. He is well-known for his bestselling Star Wars novels including the hugely popular Thrawn Trilogy. He is the author of over twenty novels such as the thrilling science-fiction series: Quadrail, The Conquerers Saga, the young adult series Dragonback and many more.

Stephen Blackmoore is the author of the urban fantasy novels City of the Lost, Dead Things and Broken Souls.
Loading...
or
Not Currently Available for Direct Purchase