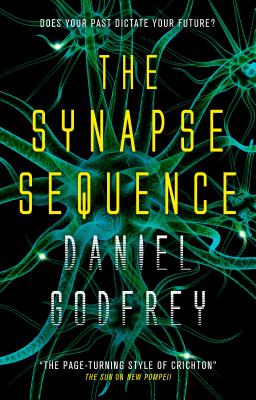 In a future London, humans are watched over by AIs and served by bots. But now that justice and jobs are meted out by algorithm, inequality blooms, and protest is brutally silenced.

Anna Glover may be the most hated woman in the troubled city - the media's scapegoat for an unpopular war. Now she hides from the public eye, investigating neglected cases by using the mind-invading technology of the synapse sequencer to enter witnesses' memories. When a PI brings her a new high-stakes case, Anna sees a chance for atonement. But soon she is drawn into a plot that threatens to upend her hard-won anonymity and put everyone in danger - even those she hopes to save.

Praise For The Synapse Sequence…

"Reads like Philip K. Dick or Black Mirror meets Michael Crichton, by way of film noir...you really can't go wrong with this one!" -Paul Kane, bestselling and award-winning author of the Hooded Man series and Sherlock Holmes and the Servants of Hell

'A whip-smart thriller in a terrifyingly plausible near-future setting, wrapped around an absorbing mystery. This is a book with something to say.' - Mark Latham, author of the Lazarus Gate series

'A fast-paced near-future technological thriller that will keep you guessing' - Marie O'Regan, editor of the bestselling Mammoth Book of Ghost Stories by Women and the forthcoming Phantoms, author of In Times of Want

"Godfrey presents this theme by weaving his science fiction inventiveness with elements of a thriller. The result is a novel that easily appeals to those who would not ordinarily pick up a science fiction novel." - Bookgasm

Daniel Godfrey has had several short stories published, including in My Weekly and Writers' Forum, and is a dedicated reader of SF and historical fiction. He studied geography at Emmanuel College, Cambridge, and gained an MSc from Leeds in transport planning. He lives in Derbyshire.
Loading...
or
Not Currently Available for Direct Purchase