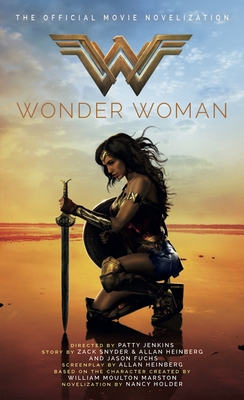 The official novelization of the eagerly anticipated movie, Wonder Woman.

Before she was Wonder Woman, she was Diana, princess of the Amazons, trained to be an unconquerable warrior. Raised on a sheltered island paradise, when an American pilot crashes on their shores and tells of a massive conflict raging in the outside world, Diana leaves her home, convinced she can stop the threat.


Fighting alongside man in a war to end all wars, Diana will discover her full powers... and her true destiny.

“All of the best things shined out through this novel in a read that fully captures the world of Wonder Woman.”  Gamers Sphere

a faithful adaptation of events on the big screen”  Superhero Novels

New York Times bestselling author Nancy Holder has written numerous Buffy and Angel tie-in novels, as well as co-authoring the first two Buffy Watcher's Guides. A four-time winner of the Bram Stoker Award, she is the author of dozens of novels, short stories, and essays on writing and popular culture.
Loading...
or support indie stores by buying on