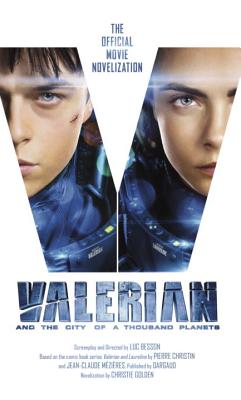 Valerian and the City of a Thousand Planets

In the 28th century, Valerian (Dane DeHaan) and Laureline (Cara Delevingne) are a team of special operatives charged with maintaining order throughout the human territories. Under assignment from the Minister of Defense, the two embark on a mission to the astonishing city of Alpha—an ever-expanding metropolis where species from all over the universe have converged over centuries to share knowledge, intelligence and cultures with each other.

There is a mystery at the center of Alpha, a dark force which threatens the peaceful existence of the City of a Thousand Planets, and Valerian and Laureline must race to identify the marauding menace and safeguard not just Alpha, but the future of the universe.

Praise For Valerian and the City of a Thousand Planets: The Official Movie Novelization…

“if you found the plots hard to follow, or if you skipped the film entirely and just like a good science fiction or fantasy escape, this novelization is worthy of consideration” - Borg.com

Christie Golden is the award-winning author of over thirty-five novels and has over a million books in print. She has written several novels in the Star Wars and StarCraft universes, as well as the New York Times Bestseller Arthas: Rise of the Lich King, a World of Warcraft tie-in.
Loading...
or
Not Currently Available for Direct Purchase