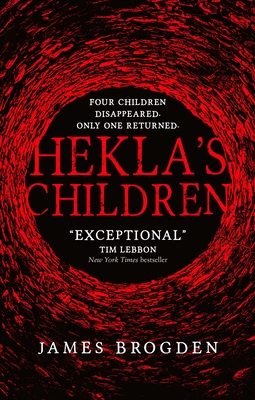 A decade ago, teacher Nathan Brookes saw four of his students walk up a hill and vanish. Only one returned, Olivia, starved, terrified, and with no memory of where she’d been. Questioned by the police but released for lack of evidence, Nathan spent the years trying to forget.

When a body is found in the same ancient woodland where they disappeared, it is first believed to be one of the missing children, but is soon identified as a Bronze Age warrior, nothing more than an archaeological curiosity. Yet Nathan starts to have horrific visions of the students, alive but trapped. Then Olivia reappears, desperate that the warrior’s body be returned to the earth. For he is the only thing keeping a terrible evil at bay…

"The engrossing plot features steadily intensifying dread, a diverse cast of characters, and expert world building. Brogden takes readers on a fast-paced and terrifying ride as everyone tries to solve two mysteries, one modern and one ancient, but both with strong ties to a supernatural evil. This is a horror novel and a standout thriller that can hold its own against the best in either genre today. Give to readers looking for tales of ancient evil like those by Graham Masterton or Douglas Preston and Lincoln Child." - Booklist (starred review)

"The afaugh's rampage through the modern world is genuinely scary, and the race to stop it will keep readers enthralled. Brogden's U.S. debut is a wonderfully odd mix of dark Bronze Age fantasy and modern-day thriller, and it works."  - Kirkus Reviews

"An exciting and bloody read with teeth." - Kirkus Reviews


“It is a joy to reach the rich worlds which have been created here and is a tale masterfully told through different viewpoints”- ScienceFiction.com

"An intriguing mystery with a thoughtful fantasy topped by a screeching horror tale...chilling and memorable....If you like your fantastic worlds mixed with horror, HEKLA’S CHILDREN may be just the book for you." - Bookgasm

“A book that dips its toe in horror, fantasy and mythology, mixed with a modern setting and the mystery of missing children; it's a surprising read with lots of detail and relatable characters.” -  Adventures In Poor Taste

“Goes after every fear of not being good enough or being brave enough. Oh, and it has the most kickass trio of women you’ll meet anytime soon...It should be purchased immediately, and not be left alone in your “To Be Read Later” pile.” -  Fangirlnation.com

“without any kind of doubt - one of the best and most outstanding horror novels of the year, so please, make yourself a big favour and read it as soon as possible. You simply can't afford to miss this novel.” -  Rising Shadow

"Brodgen’s writing is what makes this novel move. A step above much of the mainstream, he imbues the fantasy world with a strong sense of a reality which comes across as utterly natural. His characters (who show up during the course of the story and would ruin any surprises) break through any tired tropes and sing with originality and carry with them wounds that define them and their role in this story. Hekla’s Children just might remind readers of Tim Lebbon or Chris Golden."  - Cemetary Dance Magazine

James Brogden is the author of The Narrows, Tourmaline and The Realt. His horror and fantasy stories have appeared in anthologies and periodicals ranging from The Big Issue to the British Fantasy Society Award-winning Alchemy Press. He spent many years living in Australia, but now lives in Bromsgrove, Worcestershire with his wife and two daughters.
Loading...
or
Not Currently Available for Direct Purchase