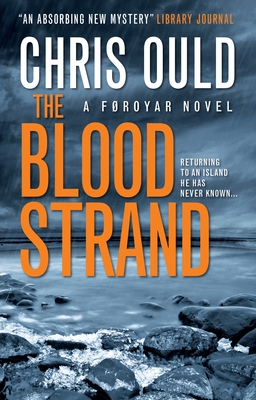 Having left the Faroes as a child, Jan Reyna is now a British police detective, and the islands are foreign to him. But he is drawn back when his estranged father is found unconscious with a shotgun by his side and someone else’s blood at the scene. Then a man’s body is washed up on an isolated beach. Is Reyna’s father responsible?

Looking for answers, Reyna falls in with local detective Hjalti Hentze. But as the stakes get higher and Reyna learns more about his family and the truth behind his mother’s flight from the Faroes, he must decide whether to stay, or to forsake the strange, windswept islands for good.

Praise For The Blood Strand…

“The Blood Strand despite the gory title, is understated, quiet and modest.” - Reviewing the Evidence

"This one is a winner for fans of both Scandinavian and British procedurals: the exotic, little-known Faroese location lends a Scandinavian feel without the forbidding atmosphere, and Ould brilliantly plunges intuitive, straightforward detectives Jan and Hjalti into a complicated tangle of secret motivations that fans of Henning Mankell and Elizabeth George will appreciate." - Booklist Starred Review

“the author keeps us constantly hungry for more” - Mysteries in Paradise

“Absolutely must read. From the bleak atmosphere to the realistic characters and procedure to the perfect slow increase of tension across the piece, THE BLOOD STRAND abandons the usual overblown nature of a thriller to create an incredibly satisfying, subtle read.” - The Crime Review

“The story moves along well and is a very enjoyable read.” - Whodunit Canada

“A nuanced look at an unusual, fascinating and really cold culture.” - Seattle Times

“Reminded me a lot of Henning Mankell’s Wallander books, both in terms of place and the characters... I like the feel of the book, the sense of remoteness not just of the place but the people and the way Ould’s put it all together.” - Lit Reactor

“Bleak and beautiful, with a poignant mystery at its heart.” Fergus MacNeil, author of EYE CONTACT

“Not only great atmosphere, but is set in an interesting location with characters who have depth and tremendous presence.” - Manhattan Book Review

"Ould did an excellent job in describing the remoteness of the Faroe Islands and the distinct customs and idioms." - Project Fandom

"For those who like their mysteries bleakly atmospheric, as aware of cultural intricacies as they are the working of the police system, The Blood Stand is a winning opener in what promises to be an engaging trilogy of crime novels." - BlogCritics

Chris Ould is a BAFTA award-winning screenwriter who has worked on many TV shows including The Bill, Soldier Soldier, Casualty and Hornblower. He is the author of The Blood Strand, the first book in the Faroes series - which received a starred review from Booklist, which called it “A winner for fans of Henning Mankell” - as well as Road Lines and A Kind of Sleep. He lives in Dorset.
Loading...
or
Not Currently Available for Direct Purchase