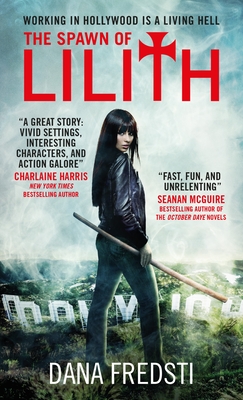 The Spawn of Lilith

Working in Hollywood is a living Hell in this “fast, fun, and unrelenting” urban fantasy series about a stuntwoman who slays paranormal creatures (Seanan McGuire, author of the October Daye novels)

Out of the spotlight, in the darker corners of the studio backlots, Hollywood hides a remarkable secret. Actor or actress, set designer, electrician, best boy, or grip—in la-la land, it pays not to be human. Vampires, succubae, trolls, elementals, goblins—studios hire anyone and anything that can take direction, be discreet, and not eat the extras. (The less you know about your agent, the better.)

Though only human, stuntwoman and struggling actress Lee Striga is a member of the legendary Katz Stunt Crew. They’re the best in the biz, in part because they can fly, and boast superhuman strength.

When Lee lands a job on the movie Pale Dreamer, however, not everyone is following the script. It’s up to her to figure out who—or what—is killing the cast and crew. Especially when Lee goes from stuntwoman to lead role...and the next target.

Praise For The Spawn of Lilith: A Lilith Novel…

“It ticked all the same boxes as the Anita Blake series. It’s definitely a must for anyone who loves paranormal adventure and romance.”
—The British Fantasy Society

“If you like kick-ass female protagonists and snarky humour, then I cannot recommend this enough.”
—Geek Pride Review

“Moments that are truly chilling and others that are hilariously funny dotted throughout the novel.”
—Flickering Myth