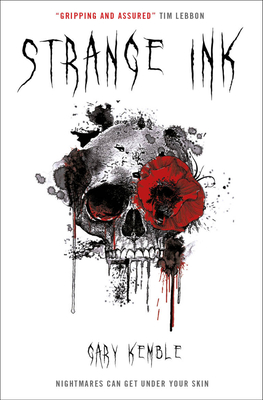 Spine-chilling horror in the vein of Joe Hill. After moving into a new house, journalist Harry Hendrick wakes up with tattoos that aren't his...

When washed-up journalist Harry Hendrick wakes one morning with a hangover and a strange symbol tattooed on his neck, he shrugs it off as a bad night out. But soon more tattoos appear: grisly, violent images which come accompanied by horrific nightmares - so he begins to dig deeper. Harry's search leads him to a sinister disappearance, torment from beyond the grave, and a web of corruption and violence tangled with his own past. One way or another, he has to right the wrongs.

"Taut, suspenseful...The novel’s gritty realism viscerally and effectively conveys the discomfort of new ink, the oppressive heat of the Queensland summer, and the horrors of war and murder...A strong debut by a promising new voice" -- Publishers Weekly

"Kemble handles the supernatural elements of the story with the expertise of a genre veteran, carefully walking the line between fantasy and reality. This is Kemble's first novel. A sequel, Dark Ink, is scheduled to appear in October 2019, but that will seem like too long a time for eager readers to wait." -Booklist

‘This book reads like a dropkick to the sternum. A skilled, vivid crafting of characters and their stories set against a backdrop of political corruption and old magic, Strange Ink is a powerhouse of a novel. Horror fans take note: Gary Kemble has arrived.’ Rio Youers

"Strange Ink grips you from its first pages, and it doesn't let go. Mystery, horror, and the perfect touch of humour, Kemble knows how to tell a tale that you won't forget no matter how fast you race to its conclusion." Trent Jamieson


"With an intense and immediate sense of place, a cracking pace, and a great everyman hero, Gary Kemble's debut novel Strange Ink is by turns thrilling and haunting, and will keep readers glued to the page." Angela Slatter


"Strange Ink is a full-blooded thrill ride with heart and soul that tears along like a Harley Davidson at full throttle. Gary Kemble's exhilarating debut is proof positive that the horror genre is very much alive and kicking!" Mark Morris


'Gripping and assured, Strange Ink really gets under your skin.' Tim Lebbon

"The emergence of Kemble’s talent is an entertaining addition to the urban fantasy genre." -SciFiMoviePage

Gary Kemble's award-winning short fiction has been published in magazines and anthologies in Australia and abroad, and his non-fiction has appeared in newspapers, magazines and online. Born in England, Gary now lives in Brisbane with his wife and kids, where he is the Social Media Co-ordinator for national news broadcaster ABC News. Strange Ink is his first novel.
Loading...
or
Not Currently Available for Direct Purchase