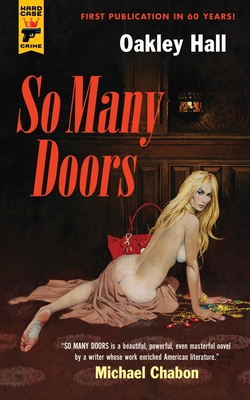 It begins on Death Row, with a condemned man refusing the services of the lawyer assigned to defend him. It begins with a beautiful woman dead, murdered - Vassilia Caroline Baird, known to all simply as V. That's where this extraordinary novel begins. But the story it tells begins years earlier, on a struggling farm in the shadow of the Great Depression and among the brawling "cat skinners" of Southern California, driving graders and bulldozers to tame the American West. And the story that unfolds, in the masterful hands of acclaimed author Oakley Hall, is a lyrical outpouring of hunger and grief, of jealousy and corruption, of raw sexual yearning and the tragedy of the destroyed lives it leaves in its wake. Unpublished for more than half a century, So Many Doors is Hall's masterpiece, an excoriating vision of human nature at its most brutal, and one of the most powerful books you will ever read.

Praise For So Many Doors…

“When I began writing fiction, I was blessed to have Oakley Hall as a mentor.  Having read many of his books, I was delighted to see this reissue of So Many Doors.  As in his other novels, he proves he is the master of characterization, narrative immediacy, and the art of luring you into a gripping story.” – Amy Tan

"Hall may be gone, but his haunting influence lives on. Read SO MANY DOORS, and you will understand why." -BookReporter

“A new generation of aspiring novelists would do well to read Oakley Hall’s work with all the care and attention to detail it deserves. So Many Doors is an experience they won’t want to miss.” New York Journal of Books

"A tale- like David Goodis's doomed lovers crossed with Jim Thompson's working-class malcontents- about the failure of men and women to understand one another, resulting in a kind of emotional sadism."  Woody Haut

"This novel of betrayal, lies, and obsessive love erupts with a powerful, tragic conclusion. If you’re in the mood for moody novel reminiscent of John Steinbeck at his best, give So Many Doors a try." - George Kelley

“...timeless and universal. Hall was a great writer, and this book will surely offer a new generation of readers a chance to discover his work” - Criminal Element

"This re-issue of a forgotten classic isn’t just a great read, it’s a goddamn master class in the art of subtlety and storytelling. The sustained simplicity of So Many Doors makes the short-form minimalism of Raymond Carver seem like a party trick."  - Seattle Book Review

Oakley Hall was a revered writing instructor whose students included Michael Chabon, Anne Rice, Amy Tan, and Richard Ford. His most famous work, the Western WARLOCK, was a finalist for the Pulitzer Prize, and was made into a movie starring Henry Fonda and Anthony Quinn. Hall received lifetime achievement awards from the PEN American Center and the Cowboy Hall of Fame, and served as a Marine in World War II.
Loading...
or
Not Currently Available for Direct Purchase