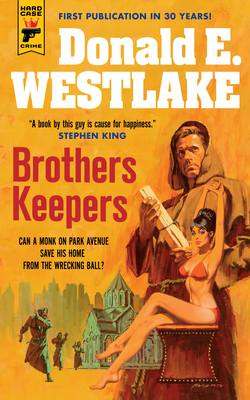 What will a group of monks do when their century-old monastery in New York City is threatened with demolition to make room for a new high-rise?

What will a group of monks do when their two-century-old monastery in New York City is threatened with demolition to make room for a new high-rise? Anything they have to. "Thou Shalt Not Steal" is only the first of the Commandments to be broken as the saintly face off against the unscrupulous over that most sacred of relics, a Park Avenue address.

Returning to bookstores for the first time in three decades, BROTHERS KEEPERS offers not only a master class in comedy from one of the most beloved mystery writers of all time but also a surprisingly heartfelt meditation on loss, temptation, and how we treat our fellow man.

"Westlake's sweetly consecrated hero, at once disconcertingly direct and utterly clueless, will bring you to your feet cheering for his impossible cause." - Kirkus Reviews

"This delightful mixture of mirth and mystery is classic Westlake." - Booklist


"This newly republished stand-alone caper novel with a twist is full of quirky characters and Westlake’s trademark humor.... It’s a quiet little gem that you'll want to keep and reread." - Book Reporter

“It doesn’t matter whether you care about religious orders or real estate law, Westlake’s writing makes for another winner.” - Borg.com

Donald E. Westlake is widely regarded as one of the great crime writers of the 20th Century. He won three Edgar Awards and was named a Grandmaster by the Mystery Writers of America. Many of his books have been made into movies; Westlake also wrote the screenplay for "The Grifters," for which he received an Academy Award nomination.
Loading...
or
Not Currently Available for Direct Purchase