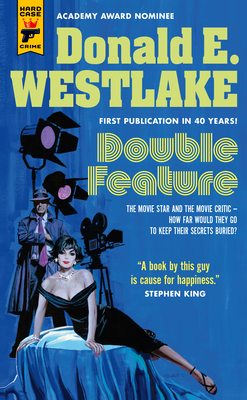 THE MOVIE STAR AND THE MOVIE CRITIC -- HOW FAR WOULD THEY GO TO KEEP THEIR SECRETS BURIED? DOUBLE FEATURE Contains two CLASSIC Donald E. Westlake novellas, A Travesty and Ordo.

WHAT'S HIDDEN BEHIND THE SILVER SCREEN?

In New York City, a movie critic has just murdered his girlfriend - well, one of his girlfriends (not to be confused with his wife). Will the unlikely crime-solving partnership he forms with the investigating police detective keep him from the film noir ending he deserves?

On the opposite coast, movie star Dawn Devayne - the hottest It Girl in Hollywood - gets a visit from a Navy sailor who says he knew her when she was just ordinary Estelle Anlic of San Diego. Now she's a big star who's put her past behind her. But secrets have a way of not staying buried...

These two short novels, one hilarious and one heartbreaking, are two of the best works Westlake ever wrote. And fittingly, both became movies - one starring Jack Ryan's Marie Josée Croze, and one starring Fargo's William H. Macy and Desperate Housewives' Felicity Huffman.

"A book by this guy is cause for happiness" - Stephen King

“Totally terrific stories...If Westlake is new to you this is a great introduction to his work, especially the range he was capable of” - Atomic Junkshop

"DOUBLE FEATURE is a gem...a must-read not only for Westlake completists but also for anyone who appreciates good literature."  -BookReporter

"Hard Case Crime continues to be one of my favorite publishers going today and I commend them for unearthing and publishing some of the most interesting work from a by-gone era." - Read Everything

Donald E. Westlake is widely regarded as one of the great crime writers of the 20th Century. He won three Edgar Awards and was named a Grandmaster by the Mystery Writers of America. Many of his books have been made into movies; Westlake also wrote the screenplay for "The Grifters," for which he received an Academy Award nomination.
Loading...
or support indie stores by buying on