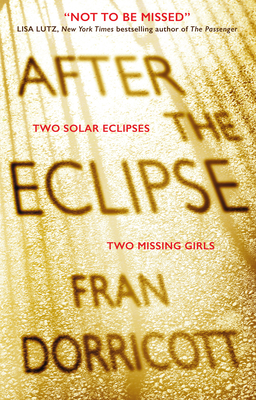 A stunning psychological thriller about loss, sisterhood, and the evil that men do, for readers of Ruth Ware and S.K. Tremeyne

Sixteen years ago a little girl was abducted during the darkness of a solar eclipse while her older sister Cassie was supposed to be watching her. She was never seen again. When a local girl goes missing just before the next big eclipse, Cassie - who has returned to her home town to care for her ailing grandmother - suspects the disappearance is connected to her sister: that whoever took Olive is still out there. But she needs to find a way to prove it, and time is running out.

Praise For After the Eclipse…

“A debut novel, written with insight and empathy as well as hair-raising suspense, After the Eclipse is sure to pique the reader's interest.” - New York Journal of Books

"assured debut thriller with a superstitious bent and a tender love story at its core." - Booklist

"An amazing debut mystery that movingly portrays the pain and damaging effects of child abduction...Brimming with heartache and hope, bitter loss and sweet surprises, After the Eclipse is sure to move readers..." - Mystery Scene Magazine

“Dorricott pulls you in and drags you along all the way to the final page, making After the Eclipse a brilliant debut. There’s little doubt that she’ll be a name to watch in the coming years” - Criminal Element

“A well-plotted and tense thriller with very human characters and a multitude of twists; a must-read for mystery and thriller lovers!” - The Crime Review

“This is an electric debut...If you’re looking for an excellent thriller that will have you on the edge of your seat until the very end, you need to pick up After the Eclipse.” - Angry Angel Books

“masterful at crafting a story of events that could happen to any of us, though they feel borderline supernatural at times” - Her Campus

Fran Dorricott is a bookseller and author. She studied creative writing at the University of East Anglia, and she received a distinction for her MA in Creative Writing from City University London. Her day job in a bookshop is secretly just a way for her to fuel her ridiculous book-buying addiction. The opportunity to draw inspiration from the many wonderful and whacky customer requests is also a plus.
Loading...
or support indie stores by buying on