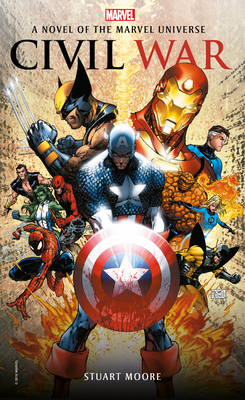 A Novel of the Marvel Universe (Marvel Novels #2)

THE EPIC STORY THAT BLOWS THE MARVEL UNIVERSE APART!

Iron Man and Captain America: two core members of the Avengers, the world's greatest super hero team. When a tragic battle blows a hole in the city of Stamford, killing hundreds of people, the U.S. government demands that all super heroes unmask and register their powers. To Tony Stark--Iron Man--it's a regrettable but necessary step. To Captain America, it's an unbearable assault on civil liberties.

SO BEGINS THE CIVIL WAR.

BASED ON THE SMASH-HIT GRAPHIC NOVEL THAT HAS SOLD MORE THAN HALF A MILLION COPIES.

Praise For Civil War: A Novel of the Marvel Universe (Marvel Novels #2)…

“When Civil War was first released by Marvel, it presented two sides to an argument and had compelling arguments from the company’s most popular characters. Titan Books does a great job of adapting this emotional battle and providing a fun read.”  Adventures in Poor Taste


“so FUN!...fast-paced, totally true to the characters we all love, and they have some outstanding storylines.” - GeekDad

Stuart Moore is a writer, a book editor and an award-winning comics editor. His novels include the New York Times bestselling Zodiac Legacy series (with Stan Lee, from Disney) and Marvel's Civil War. Current and recent comics writing includes Convergence: Superboy and the Legion (DC) and Dominion: Last Sacrifice (Amazon/Jet City); he has also written several original science-fiction projects, including the acclaimed EGOs (Image Comics). Moore has served as editor of the Virgin/SciFi Channel comics line, the Marvel Knights imprint and DC's acclaimed Vertigo line, for which he won the Eisner Award for Best Editor.
Loading...
or
Not Currently Available for Direct Purchase