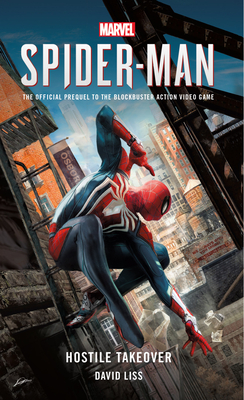 The official prequel to MARVEL'S SPIDER-MAN, the PS4 exclusive video game from Marvel and Insomniac Games, with a thrilling adventure that leads directly into the game narrative itself

THE OFFICIAL PREQUEL TO THE BLOCKBUSTER ACTION VIDEO GAME!

PETER PARKER is caught in a complicated web. Working in a cutting-edge laboratory, he's a young scientist who's trying to make a difference. Yet he's constantly burdened by the responsibilities of his second career as the crime-fighting...

Wilson Fisk--the so-called Kingpin of Crime--has returned to New York, establishing himself publicly as an altruistic entrepreneur and philanthropist. Spider-Man knows better, but he can't uncover Fisk's scheme that, if executed, will make the crime lord "too big to fail."

When a new threat--a deadly doppelganger with Spider-Man's suit and abilities--wreaks havoc in the streets, can the real wall-crawler prove his innocence? With the clock ticking and lives on the line, can Spider-Man stop the brutal rampage of the Blood Spider? Will Spider-Man fall to his fears and foes, or will he rise and be greater?

“a really good compilation piece, that any Marvel or Spider-Man fan would enjoy, and I expect will go very well with the video game setup” Geekisphere.com

“the perfect companion to the PS4 game”  Culturess

“It’s clear that he is extremely familiar with the character and he absolutely nailed the tone, dialogue, and overall personality that Peter has. If Liss’ version of Spider-Man in the novel reflects what we’ll see in the game, then I’ll be extremely happy.”  Dual Shockers

"Liss knows Parker’s voice and creates a classic Spider-Man tale any long-time fan of the character will love” Borg.com

David Liss is the author of eleven novels, most recently Renegades, the third book in the Randoms space opera trilogy for younger readers.   His previous bestselling books include A Conspiracy of Paper, which is now being developed for television.  Liss is the author of numerous superhero and science fiction comics, including Mystery Men, Black Panther: The Man Without Fear, and Angelica Tomorrow.
Loading...
or support indie stores by buying on