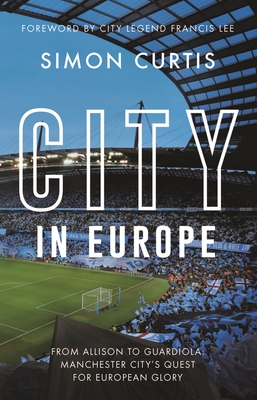 As one of the first English soccer teams to taste glory in Europe, lifting the Cup Winners' Cup in 1970, Manchester City looked set for life among the continent's elite.

But as their domestic fortunes went from bad to worse to absolute calamity, the wilderness returned.
Avid Machester City fan and respected journalist Simon Curtis dusts off the details of some truly intoxicating away days. Filled with tales of the club's travelling support and the evocative accounts of the journalists who saw the team of the Seventies, Curtis tells the story of a club steeped in history, defiantly refusing to bow to pomp and ceremony as it goes about lifting the ultimate prize.
After a spectacular rebuild and having achieved all there is to achieve on the domestic stage, including a record-breaking 100-point season in 2017-18, City's deep-pocketed owners have their sights firmly set on European glory once more. Yet for all their recent success at home, they are anything but welcome guests at Europe's top table.

Simon Curtis is a freelance journalist specialising in all things Manchester City. He has written extensively for the club's various official platforms, with regular columns in the matchday programme and articles on the official website spanning a number of years, in addition to regular contributions to The Blizzard, The Guardian and World Soccer Magazine. He lives in Manchester, England.
Loading...
or support indie stores by buying on