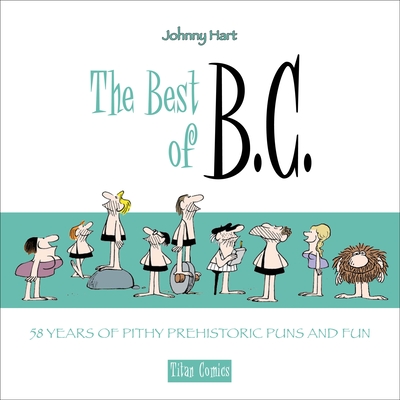 Featuring 627 of the very best daily and Sunday B.C. comic strips specially selected by the Hart family and a foreword from Jim Davis - creator of Garfield.

B.C. is a daily American comic strip created by cartoonist Johnny Hart. Set in prehistoric times, it features a group of cavemen and anthropomorphic animals from various geologic eras in lives that strongly correspond with the world of today.

Praise For The Best of B.C.: 58 Years of Pithy Prehistoric Puns and Fun…

"This is an endearing, nostalgic, and sentimental journey for adult readers, certainly. However, the snappy humor holds up well enough to appeal to younger audiences, and the drawings are still captivating. Overall, a grand review of a mirthful creation." - Library Journal Starred Review

"very entertaining and will evoke much joy at revisiting these characters. This is a book one might want to keep on the coffee table to share with others." Portland Book Review (four-star review)

John Lewis "Johnny" Hart (February 18, 1931 - April 7, 2007) was an American cartoonist noted as the creator of the comic strips B.C. and Wizard of Id. Brandt Parker co-produced and illustrated Wizard of Id. Hart was recognized with several awards, including the Swedish Adamson Award and five from the National Cartoonist Society including the Reuben award for B.C. in 1968 and Wizard of Id in 1984. A devout Christian, Hart was often called "the most widely read Christian of our time," over C.S Lewis, Frank Peretti and Billy Graham.
Loading...
or support indie stores by buying on
(This book is on backorder)